We always wondered how countries get taken over by dictators and now we know.  They learned at the knee of AZGOP Chairman Robert Graham.  Or maybe Graham learned from the likes of Castro or Hugo Chavez of Venezuela.  However that happened, it’s clear Graham has it down pat.

On Saturday, January 23, Arizona State Committeemen got a clear eyed view of the total disregard Graham has for the party faithful - the “Wacko Birds” and “crazies” in McCain parlance.  Of course, most of them learned that lesson shortly after Graham got elected by these same State Committeemen. Almost immediately, he began to ban party workers from the party headquarters.

First, Graham threw out two resolutions that should have been on the agenda because he’s a coward:  resolution #1: Anyone But McCain was submitted and rejected by Graham because Graham is owned by McCain.  The resolution was passed by a wide margin at the Maricopa County Republican Committee meeting just a week earlier, despite Graham and his minions attempting every delaying tactic in their bag of dirty tricks, hoping the Committeemen would give up and leave.  Resolution #2:  Censure Robert Graham for failure to uphold his duties as Chairman, failure to carry out the mandates of the State Committeemen from last year, because he is under investigation by the Federal Election Commission for campaign finance violations, for kicking the Maricopa County Party out of the headquarters, though it had met in the headquarters for years under prior Chairmen, for consistently violating the Bylaws and other misdeeds.  Both resolutions were brought from the floor.

Graham, who paid a 7-figure fine in California to settle a case against him for money laundering, conducts party business in secret.  Then he concocts enormous lies to cover his behind and blames his failures on district Chairmen (sound familiar??).  This is business as usual for Graham, a blundering Chairman.

But back to the business of the resolutions:  state committeemen smelled a rat when legitimate Points of Order and motions were brought from the floor in accordance with the AZGOP Bylaws, which Graham considers a nuisance.  Graham failed to conduct business properly, as required, leading up to the meeting and again during the meeting.  The Chairman considered every Point of Order and motion Out of Order, his way of saying, take a hike, you heathen!

When the two resolutions noted above came to the floor, his Parliamentarian droned on endlessly reading from Robert’s Rules of Order as to why the word “Shall” (legally meaning “absolute”) didn’t really mean “Shall”, why Robert’s Rules really doesn’t allow for the party to endorse candidates, even though neither resolution called for an endorsement but in fact, called for no endorsement.  Then, he droned on again as to why State Committeemen couldn’t censure the Chairman but eventually got around to reading that a legal suit would have to be brought and other obscure reasons not to allow the resolution to be heard, blah, blah, blah.  We can only guess how much of AZGOP money was spent digging up reasons to save Graham’s bacon.  Rumblings through the crowd favored suing him, not necessarily to take him out of office but to assure he could not get elected again next year.

This, dear reader, is why the Republican party is no longer a viable party locally.  What was demonstrated at that meeting made it crystal clear that the corruption within the Arizona party leadership is absolute and unwavering.  Maybe it is so in other states, possibly every state. Every State Committeemen who arose at the crank of dawn (it makes everyone cranky to get up at 4:00 am to get to these meetings), stood in the cold early morning, suffered bad lunchtime sandwiches and were subjected to a demonstration of Graham’s “I” problem (I did this, I did that, I am going to do….I am Mr. Wonderful, I, I…) was treated dismissively, as though they were road kill on the bottom of Graham’s GQ shoe.

Here’s the odd thing: it’s very likely that had Graham done the honorable thing, for maybe the first time in his adult life, and allowed the resolutions, supported by up to 261 people at the meeting - about half of those present in person - be heard and voted, that the resolution to censure him would have failed.  Although many told us he deserved to be recalled, not just censured, it didn’t appear that they really had the stomach to do the deed in an important election year when there is work to do to save the Republic.  It’s almost a certainty that the Anyone But McCain would have passed.

Being magnanimous and showing real leadership is just not in the thin skinned Chairman's wheelhouse.

One last thing to be perfectly clear: the same kinds of things happen in the Democrat party, too.  The Founding Fathers would be so proud!

Check out this footnote from a savvy PC, I'm hoping the link comes through. 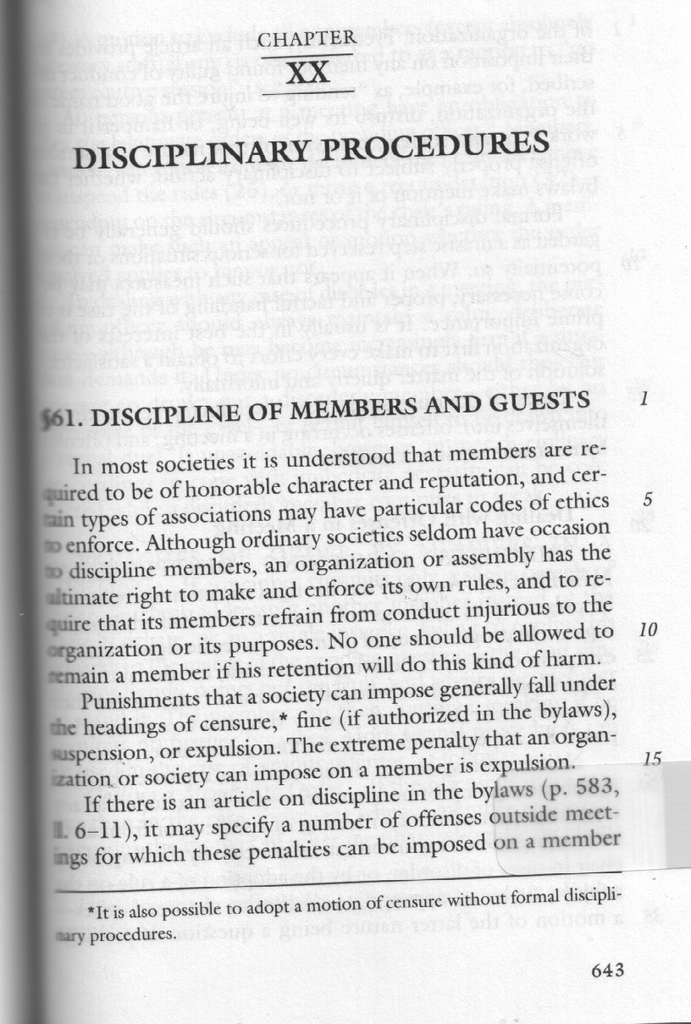 Why did Mr. Parliamentarian miss the footnote on page 643 of Roberts Rules?

Peggy: we got your attachment up on the Robert's Rules of Order, page 643.  See it full size here:

Permalink Reply by Peggy McClain on January 24, 2016 at 2:02pm
Thanks and thank you to the Precinct Committeeman who discovered it. Kind of like cutting Gabby's mic. Delphi Technique at work in AZGOP yesterday.

Sounds like another rousing good time.  @Peggy  That is a GREAT question.  White out, anyone?

Any wonder why we are relying on and love Trump?

IF .... IF .... IF ... Robert Graham is allowed to become the RNC Chairman ... then just image the "deals" that would be cut behind the closed doors and behind The Curtain of Oz with a Donald Trump ???  There is a reason the GOPE is now supporting an anti-establishment candidate !  What webs THEY weave when THEY attempt to deceive !!!!!!!!!!!!

Wake Up people... "In politics, nothing happens by accident. If it happens, you can bet it was planned that way." - Franklin D. Roosevelt .

@John  CRUZ is the new establishment candidate.  Just look who is funding him.  Trump cutting deals with the RNC? HA!  That's rich.  I saw them both on Media Buzz today and Cruz is playing a mind game.  Listen closely, he never answers the questions but pivots to obfuscation.  Fascinating to watch once you notice.

ALL Candidates today rely on funding support from all kinds of sources, some do take out personal bank loans as well, that is ALL except ... one billionaire CEO who has made "deals" with those who have something that he wants!  That is the politics of the modern age.

Pat I SUGGEST you read this and correct the lofty utopian ideals of what Trump would do to our Constitutional conservatives: http://canadafreepress.com/article/78431?utm_source=CFP+Mailout&amp...   WORDS have meanings of what a future would foretell once IN Power, and "deals" make me cringe after all we had a "great deal" with Obama and Iran as they ready mid-range ballistic missiles with a nuclear warheads aimed at Israel ... that would bring on their 12th Imam of hate.

Hello, John. I do not understand why you are posting about Trump when this thread is about someone else completely.  It gets so confusing when people go off message on a thread. But since you did segue to this topic, I did see a complete replay of that clip of a video shown on CFP and we all know that things taken out of context or edited can be a different story altogether. We all know that everyone in elected office makes deals. Whether it is Cruz, Trump, Carson or Bush, our legislators or city councilmen, deals will be made.  Don't you think the honest question is, what kind of deals will be made and how will America fare as a result? We are laboring under Obama deals, Bush 2 deals, Clinton deals and even Reagan deals.  Let's please do be realistic, shall we.  It's time to make deals that favor America instead of that very terrible TPP deal, the Iranian deal, etc.  Please tell me who voted for those deals?

When Pat J responded "CRUZ is the new establishment candidate....." I was just responding to her statements.

Graham, McCain and all the other liars and thieves, known as RINOs, need to be purged from the Party, period!