Paul Ryan is abandoning the ship before it sinks

[Editor:  One down, 236 to go.  This opens the door for Paul Nehlen who is very conservative and running against Ryan. Of course, Dems are gunning for that seat, too.  Ryan is preparing to let voters forget his dismal record before he runs for President, probably in 2024.  This is an amusing read even though they excoriate Trump... as usual.]

"House Speaker Paul D. Ryan, R-Wis., has told friends and several colleagues that he has decided not to seek reelection this year and will soon inform colleagues of his plans, according to several people familiar with his plans.

"The decision comes ahead of mid-term elections that were already looking treacherous for Republicans, who risk losing control of the House.

"The party has seen a large number of retirements, and Ryan's exit is certain to sap morale as Republicans seek to contain a surge in enthusiasm from Democrats, whose fortunes have been buoyed 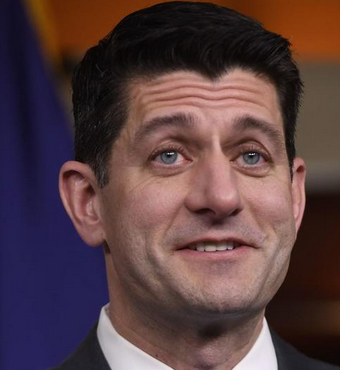 by the unpopularity of President Trump."

In a written statement, his longtime adviser Brendan Buck said, "After nearly twenty years in the House, the speaker is proud of all that has been accomplished and is ready to devote more of his time to being a husband and a father. While he did not seek the position, he told his colleagues that serving as speaker has been the professional honor of his life, and he thanked them for the trust they placed in him." [And he retires with a big fat paycheck, courtesy of we the people he never represented.]

The political reality is less noble. One can hardly imagine a more obvious signal that Ryan fears the prospect, if not of losing his own seat, than of losing the majority and hence his speakership. In the past, speakers — understanding the demoralizing impact that premature white-flag-waving would have on their troops — had the good sense to wait until after the election to announce that they would exit the leadership of their party. Ryan's move has several consequences.

First, Democrats (who were heavily spending to defeat Ryan) can declare victory in that race and save the money it would have taken to knock out a sitting speaker. Get ready for Democrats' taunts that Ryan lacked the courage to stand before the voters with a record like his.

Nehlen is running in a strong Repub district.  He nearly beat Ryan last time so he should be the next Rep from WI, but no Repub should take anything for granted regardless of how red the district.

Actually, Nehlen came in far behind, which surprised everyone because he seemed to have tremendous support.  Only 16% in a two man race.  Maybe there will be no shenanigans, this time.  I don't count on that.  In that race, 68K Republican voters vs 25K democrat voters.

Paul Ryan will not be missed now or ever.  He was and is some the problem in Congress.  That budget he put together with his commie dimms proved that beyond any doubt.  He stuck the people of this country with a disgusting debt load.  Now Republicans cannot disavow their complicity in uping the debt owed.  So disheartening that he has and will get off scotfree.  The voters of Wisconsin, like the voters of Arizona should be ashamed of themselves and hide their heads.

Does it really matter which party of the two party tyranny is in control? Our debts continue to multiply! Why? Because every elected official is "adhering" to enemies of our Constitution. To my knowledge none have acted to rid America of the current monetary policy that's in compliance with the 5th plank of the Communist Manifesto and which is designed to assure the owners of the world's central banks (the FED in America) will one day hold title to all real wealth of their choice, a mortgage on the remainder and a claim on all future production. Such "adherence" is - by definition - Treason; the penalty for which - according to Art III, Sec 3 of the Constitution - is death.

The slope of the curve showing our indebtedness is now asymptotic to the ordinate. We've reached the point where America must soon reach hyperinflation status; all because of a lack of knowledge and/or courage and integrity by politicians at every level. Is it any wonder people in a position to seriously address this issue are choosing to jump ship? But with America's voters so poorly educated I suspect they will just continue to rotate from one party of the two party tyranny to the other; i.e., to continue the process and expect a different result. This is the definition of insanity. Americans are like POGO; we have met the enemy and he is us.

Anyone unfamiliar with America's monetary policy should visit http://www.thecnc.org/Documents/DebtReduction.htm.

I am going to take a more positive take on Ryan's self imposed retirement. He often referred to himself as a 'principled conservative' but when the chips were laid before him and he could play the chips to backup the claim he folded. I say good riddance to Mitt's little  fraud boy.

I have a lot of concerns for the outcome of the midterms. To get and keep the republican majority lays upon thee voters and the work President Trump will do in districts.

Count not on the feckless RINO/CINOs.

You are correct Patricia.

He shouldn't wait until November to leave.  But thank God, Trump will have one less enemy.