A View of the Watchamecallums Republicans Meeting, election results

The Mandatory Meeting of the Maricopa Republican Committee, held on Saturday, January 13, went off very smoothly and efficiently, to every conservatives surprise.  (relieved sigh)  Those who routinely attend these meetings have become accustomed to shenanigans galore, floor fights, shutdowns of conservative voices and all the rest of the tricks the establishment can dream up in both the County meeting and the State meeting which is still to come.  If you missed all the drama, just wait a couple of weeks and you can get it at the state meeting if they ever find or reveal a location!

We had no reports of suspected vote cheating.  The usual suspects gave speeches, such as Gov. Ducey, several Congressmen, Maricopa County Attorney Bill Montgomery who oddly and in our view, inappropriately gave a speech for Member-at-Large for a MCRC slate candidate who was not in attendance.

Neither Sens. McCain nor Flake showed their faces and that was overall very good for the Pro-Trump faction of the party.  Candidates were out in force with their teams getting signatures on petitions and stumping for their election. Latest Senate candidates, Martha McSally and Joe Arpaio, were there in full out campaign mode, with many flocked around the former Sheriff.

It took four rounds of voting to get five Members-at-Large elected from the field of 16.  Here are the
winners: from the MCRC establishment slate were Monica Yelan (the only candidate to win on the first round of voting) and Johnny Melton - two of five for that team.  For the conservatives: Tristan Manos, Joe Neglia and Janel Soyster Buchhold were elected, all of whom were our picks for election.  ALL three of these people are unafraid to stand up against shenanigans.  Neglia is a parliamentarian and can keep that side of the ledger on the straight track. That will be something new for establishment politics in Arizona!

Thanks to Joe Neglia for this video of the highlights of the meeting.  It's long so if there are parts you are particularly interested in seeing, like the winning speeches, here is a time line so you can go to the part that is of most interest to you: 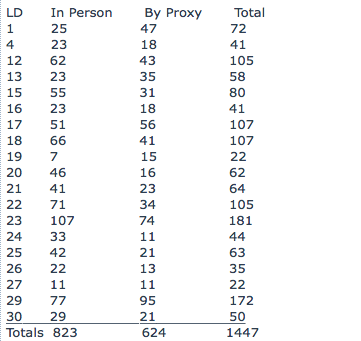 Here are some stats from this and prior meetings.  NOTE: at the 2017 meeting, there were 63% of votes cast by people who did not even show up. That dropped by about 15% this year which contributed greatly to the win by the conservatives. Overall, too many proxies are allowed at these meetings:

The high proxy voting is why there is an effort this legislative session to pass a bill limiting how many proxies can be carried by any one person. Proxies have decided too many elections in the Republican party! We don't get to wake up on election day and send a proxy to the polls to vote for us and we should have NO proxy voting in state meetings, either.

I have received this info on the location of the state meeting:   "The January 27th (Saturday) State Convention will take place at the Church of Nations, 6225 North Central, (north of Bethany Home Road) starting at 9AM. For the State Committeemen, it's best to arrive about 7 AM. This will allow time for you to register and obtain documents as well as sign petitions" such as the one by Archie Dicksion to allow the proxy-limiting resolution to be placed on the agenda.  The Rules Committee had turned down his previous petition without an explanation so he needs 20% of us to sign the new petition early that morning.

Thanks, Mike. If we had enough sedatives, we would take the time to read the email called the AZGOP newsletter. Thanks for saving us from that experience into Insipid-world.

When SCs arrive, please seek out Archie Dicksion and his team who are gathering signatures to put the Proxy Resolution up for a floor vote.  Barry Wong incorrectly refused to add it to the Resolutions for both the MCRC and State meetings.  They changed the rules at the very last second while the committee were considering Resolutions submitted by SCs.  They decided that a member of the Resolutions Committee, all rabid McCain-like republicans, had to nominate any submitted resolution for consideration.  Needless to say, they didn't like the idea of limiting proxies because that is how they get elected.

New info and stats added to the article.

Right, Barbarian. I will add this: some of us are past our prime for running for office (take notice, Sheriff Arpaio) but all of us can do something. Stuck in your home?  Make phone calls for your favorite conservative candidate. People will talk to a person and get angry at robo calls. Otherwise, work for your favorite candidate: find groups for them to speak at, put out signs, distribute literature. Before doing any of that, VET VET VET  the candidate you like and vote for the candidate who can win.  Long shot votes might make us feel good but does nothing to fix the country. And I don't want to hear about the lesser of two evils. That evil is ALWAYS a democrat like McCain or Flake!

OK, you guys.  Let's understand the rules: all CAPS CONSTITUTES digital screaming.  That is universally understood.  If a mistake was made on this article's comments, let's just use our Grace and forgive.  Then let's not use all caps except in "QUOTATIONS."  We all make mistakes.

We all need to send e-mail to Trump demanding that the treaty UN Agenda 21 be taken to the congress for ratification. Make these traitors expose themselves.