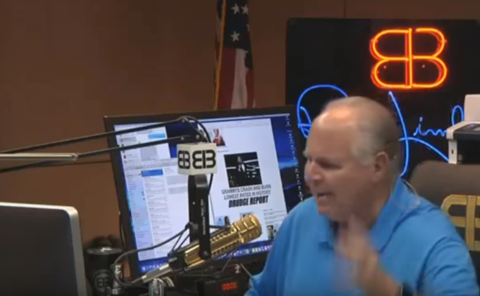 In Rush Limbaugh's broadcast today (Monday, January 29th, 2018) VIDEO HERE, Rush called attention to the leftists: the leftists who are more—dare we say—"anti-American," who are also anti-Constitution, anti-God-given Rights, anti-Liberty, anti-Freedom, and so on among the mainstream politicians, organizations, businesses, media, entertainment, along with those all throughout pop culture who rank as being among the most unpopular, controversial, and polarizing brands around.

Seeing this, we got to thinking RINOs (Republicans In Name Only) rightfully deserve a place somewhere in there, too, although we'd back off the "anti-American" phrasing, because RINOs are more misguided than anything else (although the consequences of being misguided may bring about negative repercussions for America and Americans, so "it's complicated"), and being as most RINOs are essentially patriotic and like and love America, let's just remove that thought from anyone's mind right here and now, and rightfully so. 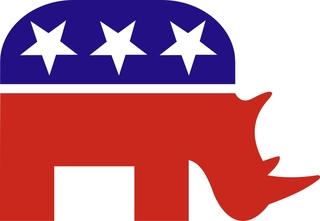 (RINO - REPUBLICAN IN NAME ONLY) Of course, for some on the list, like President Donald J. Trump (and, so, too, it follows) the "Trump" brand, being on the list is understandable and a good thing, like a "patriotic, political, and REAL Republican badge of courage," as the saying goes: "taking flak showing Trump's directly over the target."

In a way, it's like the REAL Republicans at this past Saturday's Arizona Republican Party (AZGOP) Mandatory Meeting, who stood up and stood strong in the face of the RINOs (and some susceptible moderates).

Once again, the RINOs were just too "shy" to stand on their own and take care of their own business. Instead, AZGOP's "CHINO," Chairman In Name Only, Jonathan Lines, "called for backup" to serve as his AZGOP Establishment frontman, representative, and so-called "presider." Some wondered how to refer to, and address, the stand-in: is it "Mr. Chairman," or "Mr. Presider?" And who was this "presider," anyway? Once again, the one and only Mr. Al Gage. (Of course?)

REAL Republicans stood up for the good of the Republican Party, for Arizona, and for America. Essentially, what drove these REAL Republicans was believing in and being guided by the Founding Documents cited above. Add to that, a strong "whatever it takes" attitude, along with the smarts to back it up. These are the REAL Republicans, seen by RINOs as "polarizing."

Yes, that's a consequence of standing up and standing strong for what you believe in: you may be seen as polarizing. Actually, you may be more than seen as "polarizing," you may actually BE "polarizing." It only goes to show there's one side and the other side ("REAL Republican" and "OTHER," aka, here, "RINO"), and you're either on one side or the other, moderates sprinkled in and around here and there. Let's be realistic, that's just how it is, that's just how it goes, and that's alright.

If challenged or otherwise provoked, our Forefathers stood up and stood strong for us, so we must stand up and stand strong for them, for others in our time, and for future generations.

All of the above provided for and guided by the Declaration of Independence, Constitution, and Bill of Rights. Why "go along to get along" with others who fail to live up the same, the others proudly citing it's "for the good of bipartisanship"..."it's about reaching across the aisle"..."it's comprehensive (fill in the blank) "... or, one of the most popular themes, the misnomer of "it's for the children?"

Then again, this CEO World article cites just another poll. Yep, that's it. Just another poll. There goes another poll. Believe what you will about this poll, forget the polls for a moment: it's a given that RINOs are a bad brand. More than that, RINOs give REAL Republicans and the Republican Party a bad name.

Back to the headline in this Arizona Freeedom Alliance (AFA) post...

Given RINOs belong in the rankings, the RINO brand being among the most controversial, unpopular, or polarizing brands (as seen from the perspective of REAL Republicans), where would YOU rank RINOs on the list?

Take it and run with it, however you like, and we look forward to seeing your take on it.

(Respectfully, please, for the sake of the REAL Republican Movement, all are encouraged to "keep it classy," being mindful you may be representing yourself as a REAL Republican among "We The People," for all who see to see.)

Will we ever be rid of RINOS?  Seems they are multiplying at a rapid speed

Isn't being a true REPUBLICAN a bit like being pregnant? One is or one isn't! Being a true REPUBLICAN means fully supporting the REPUBLIC! It means supporting the policies and principles of the Constitution. It means fully upholding the law against all who violate it regardless of their wealth or position in life and accepting that America's founding documents are the Supreme Law of our land.

Though I've tried to find a true REPUBLICAN among all who represent me I have failed. Not one elected official I'm aware of is true to her/his oath! NOT ONE of them will acknowledge that Americans now live under the ten planks of the Communist Manifesto; that we are in economic bondage; buried under a public and private debt of over $100 trillion due to a monetary policy supportive of the 5th plank of the Manifesto. Not one will so much as voice a need to bring this policy into compliance with the Constitution; much less introduce legislation to do so.

Wake up everyone! Accept that we are ruled by a two party tyranny! Recognize that as voters, we have alternated between Democratic and Republican control of the Legislative and Executive branches of government with no change in the major issues that have destroyed our REPUBLIC. Accept that the very definition of insanity is to do the same thing over and over and expect a different result!! I know that I as one who contributed to Trump's campaign and who voted for him in hopes he would be true to his promises and take the actions needed to MAGA must now accept that I too am insane. Never Again!!

We need to make sure that RINO graphic goes viral.  Such simple but attention-grabbing devices are often more effective than well-presented deliberative reasoning when trying to communicate to less-involved target audiences.  To wit, those now in the moderate mushy middle who haven't really thoroughly thought it through, the politically unaware or uncommitted, and those existing Conservatives who need to be shaken awake and energized.