For those of you who showed a lot of interest in the Proxy Abuse article - and if all of you had been PCs and been at the state AZGOP meeting to vote, the outcome might have been different, take a look at this, connect the dots to the previous article. By the way, this is from a Facebook post by Lisa James who works for McCain and was heavily involved in the conservative PC purge McCain orchestrated.  She is a PC in LD23 and we hear is a constant thorn in the side of the conservatives there.  But then, she gets paid handsomely to do that!  For her and others like her, such as at least some of the people on the payroll of the AZGOP, it's not a volunteer avocation, it's a career.

Sent in by an astute AFA member with a request that we post it under the title Proxy Pig.  Guessing PCs might not want to hit the McCain purge radar.  Note the labels under the photo: 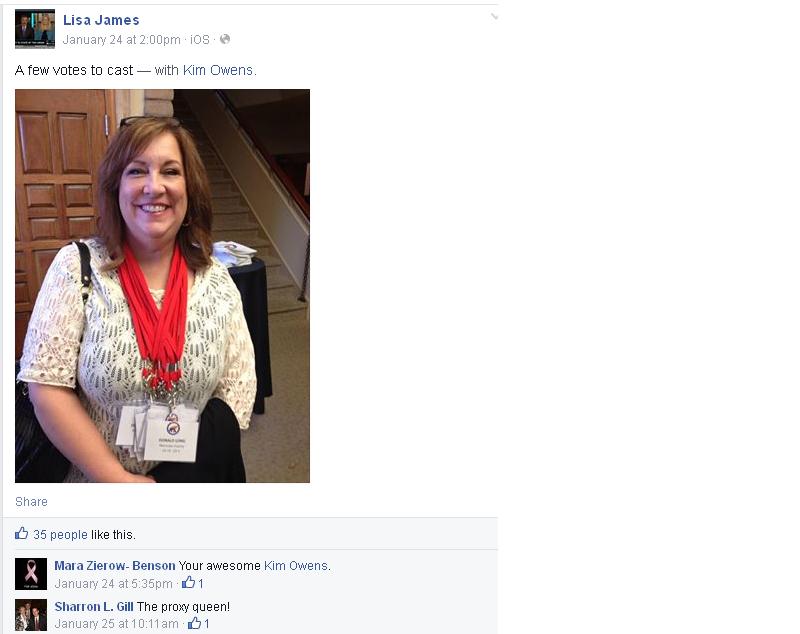 Standing by the infamous steps where all the McCain and Vietnamese collected.  Hope the church did not allow their Sunday School kids go near that area prior to it being fumigated.

I think we should have a limit on these proxy forms now.

Permalink Reply by Arizona Freedom Alliance on February 2, 2015 at 7:51am

AND, change who can be given them at the state and county meetings.  What the Proxy Queen did was take the ballots from those who were properly credentialed State Committeemen already at the meeting.  This was a well orchestrated maneuver, planned out well ahead of time.  Multi-pronged solutions are needed.  However, we have no worries that whatever rules are set in place can and will be violated by those bent on cheating the spirit of the system.

Saga of the Little LD that COULDN’T COME

SIX of the PHANTOM PROXY PCs who voted in the State Organizational Meeting on the 24th HAD NEVER, EVER ATTENDED A SINGLE LEGISLATIVE DISTRICT LD19 MEETING!

LD19 had 9 State Committee seats to be filled

Election results on November 17, 2014 were contested by Kim Owens and revised based on allowance of some interpretation of the LD19 bylaws if numerous errors, lack of ballots for the proxies, & probable spoiled ballots are overlooked

3 PCs registered in person, six PCs by proxy at the State Meeting on January 24th, 2015

All proxies were presented and voted by ONE person (Kim Owens) who had attended only one LD19 meeting all year – the last meeting - which was the organizational meeting - with the intention of dominating the voting with the “phantom PC proxies” and getting the State Committee voting rights from the other PCs in LD19 who had religiously attended all of the meetings throughout the year. Stealing the “Heart and Soul” of the LD if you are cold-blooded enough to do it is allowed in the LD bylaws. (Allowed by some interpretation of the LD19 bylaws if numerous errors, lack of ballots for the proxies, and probable spoiled ballots are overlooked, the actual “secret ballots” were copied, and emailed as an attachment to a number of LD19 PCs by Kim Owens!!!).

Six “phantom proxy PCs” who never attended a single meeting in LD19 were voted in unison by a PC (Kim Owens) who attended only the final LD19 meeting. This PC had never contributed to any of the other work at our LD, performed any of the other duties to benefit our LD, represented our LD19 during any of the candidate presentations and visits, and never offered any financial support or fund raising for our LD19 in any way – just suddenly showing up at the final meeting with proxies with intent to dominate.

Much worse of all, this pitiful PROXY ABUSE activity (allowed by some interpretation of the LD19 bylaws if numerous errors, lack of ballots for the proxies, and probable spoiled ballots are overlooked) denied six active, hard-working LD19 PCs with the ability to compete effectively for Committeeman seats, and were thus denied the ability to participate in the State Organizational meeting representing the “HEART AND SOUL OF LD19.” Instead LD19 was represented by six “phantom proxy PCs” who had NEVER EVER EVEN ATTENDED A SINGLE LD19 MEETING.

The morale in our little “LD19 that COULD” has been devastated and has been turned into the little “LD that COULDN’T COME.” Republicans are fed up with this and are leaving our little LD that was just getting a strong foundation!!! They have had enough of this contempt for our LD19 legacy that we were building one meeting at a time. Many who worked hard all year long are in SHOCK at what has happened – fully legal per our bylaws but disgusting and contemptible in practice. Some in West Valley political circles are actually celebrating what has happened in LD19!!!!!!

There is not much of an appetite for trench warfare on our part, nor the part of anyone in our friendly little LD19. We would like to return to the days when we baked cookies to sell for the 50/50 to raise funds for our treasury, when we supported the FIRST TWO REPUBLICAN CANDIDATES EVER TO BE ON THE BALLOT IN LD19 HISTORY, when we walked the neighborhoods, when we supported the GOP BALLOT Door-to-Door, and when we made phone calls, and when we believed in the GOP and we worked so hard to grow and get ready to expand greatly in 2015. We had many proud moments of PROGRESS to celebrate as a result of lots of hard work by a few dedicated PCs in the field who had been hard at work all year long. (Never saw Kim Owens or any of her phantom PCs anywhere.)

And then Kim Owens showed up all of a sudden, had an agenda, well organized, large pile of proxies in hand.

She devastated our little “Little LD that COULD” and left a smoldering pile of rubble – with many Republicans now do not want to have anything more to do with LD19. Maybe that was her objective.

Some in the West side GOP are celebrating this as a huge sick “victory” and it makes us wonder what their plans are for the GOP? We certainly need to do a better job of getting to know who the real enemy is – we thought this sort of activity should be reserved for democrat/communist/muslim tyrants who are actively tearing our Republic apart TODAY.

Permalink Reply by Arizona Freedom Alliance on February 4, 2015 at 8:16am

Kudos and many thanks to Joseph for having the courage - the political courage - to lay it on the line to preserve the PC system in the Arizona Republican Party.  Shining a light on the roaches is the best disenfectant.  CLOSE THE PRIMARY.  Pressure the AZGOP Chair to do what the state committeemen told him to do - TWICE.  He's on a free trip to Israel now but he will return and have a major case of amnesia about what the state committeemen voted for him to do!  McCain CANNOT win a primary with only Republican votes and he knows it.  That is why, with the help of the AZGOP chairman, he set out to corrupt the PC system.  To quote Art Olives, "TAKE IT TO THE BANK."

Then contact Senator Sylvia Allen, Senator Judy Burges, Senator Gail Griffin and Senator Kelli Ward AND your own Senators.  Encourage them to add language to amend SB1309 to include stopping ballot swapping at the state meeting.  Then encourage you own Senator and then your two Representatives to vote to pass the bill and send it to the Governor to sign.  Find contact info on our AZ Legislation tab at the Take Action banner.

Contact LD14 and discover how the proxy abuse in Graham County was avoided.