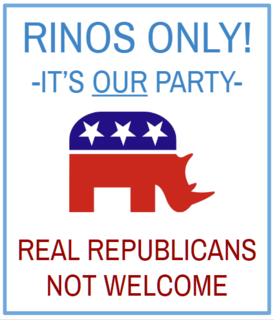 In the Arizona Republic article (posted Monday, 3/19/2018), "Arizona's GOP governor proposes 'tool' to take guns away from potential school shooters," is a prominent so-called "Republican" figure in Arizona politics exposing himself for the RINO he just might be, saying what we've realized all along about RINOs: it's just too hard—here, just too "pure"—for RINOs to be REAL Republicans?

To say the proposal's "STOP" program (Stop Threat Order of Protection) shakes things up is an understatement. The proposal—somehow—provides police, parents, schools, psychiatrists and others the opportunity to petition courts to temporarily seize weapons from the home of anyone who is—somehow—identified as a threat to oneself or others.

What could possibly go wrong?

"Some Republicans in support

House Speaker J.D. Mesnard, R-Chandler, said he agrees with the direction of the governor's plan. Mesnard has said he hopes "PURE IDEOLOGY" doesn't get in the way of the Legislature taking steps to protect kids." So, in other words, is this to say being a REAL Republican, one who rightly upholds the U.S. Constitution, here, the 2nd Amendment "right of [we] the people to keep and bear arms"—a God-given right that "shall not be infringed"—somehow gets in the way of "taking steps to protect kids?"

For all you REAL Republicans out there, "how's that make you feel" about yourself, now?

See how AFA's been tracking this story HERE and HERE, and stay tuned for future AFA posts as the story plays out.

Over in "Opposite World," see Arizona Republic writer Laurie Roberts' bizarre take HERE, headlined "Gov. Doug Ducey's gun proposal is a good start," where she says, "In Arizona, the gun is an object of worship—right along with God."

Another good resource to check into is the Arizona Citizens Defense League HERE, the primary organization working to preserve our 2nd Amendment rights here in Arizona. Interested in and committed to more than just checking into it? Stand up and stand with AZCDL HERE as it stands strong for the 2nd Amendment.

"Liberty once lost is lost forever.  When the people once surrender their share in the Legislature, and their Right of defending the limitations upon the Government, and of resisting every encroachment upon them, they can never regain it."   John Adams

Yes, do join the AZ CDL.  They are very active and effective in protecting and advancing the 2nd Amendment in our state.

I urge all to sign up with the Arizona Citizens Defense League.  They send out legislative alerts so we can contact our reps, committees, etc and hopefully nip anti-2nd amendment legislation in the bud.  Remember, the more people the better. This is our land, This is our government we elect. We must work for our liberty and prosperity every day.