[Editor: We continue to say: like the U.S. Constitution, as Benjamin Franklin said, [Bylaws] are for a moral people. [They] are useless for any other. You can say the same about rules, policies, etc. Organizations shouldn't have to have cops on site in order to follow the Bylaws and the rules.  We talk about the Democrats but the Republicans are world-class rules violators, in too many instances.] 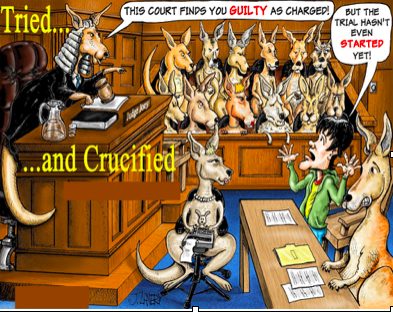 When I relocated from the progressive state of New Jersey to the great state of Arizona, I never realized that “Yavapai County Republican Women” (YCRW) seems to think they live in Australia (not to insult the Australians) because I just experienced my first kangaroo court.

I was figuratively tarred, feathered and run out on a rail.

The people who wanted my removal were everything: Investigators, judge and jury.
The goal was to derail me from ever getting a seat on the Executive Board starting from the Nomination Committee until the time I was removed. The Nomination Chair did not arrange to have one meeting to interview all the candidates and review our applications. I was the only candidate at my meeting. All the candidates ran unopposed. On Election night, to my surprise the President announced from the podium that I had a challenger and that my challenger was the Chair of the Nomination Committee! The chair never announced my challenger’s intention and seemingly did not possess the technical skills needed to be Secretary not having email, texting or possession of a cell phone.

The most egregious was not informing me fully of the no less than 20 unsubstantiated allegations and denying me due process.

The Board never presented me an opportunity to discuss any concerns. Their decision was either I resign or be threatened with an investigation. I was never informed of all the charges, and not given time to prepare for my defense nor even told the date of the investigation. I was denied copies of recordings and minutes.

As the duly elected Secretary I was responsible for records and to keep a current inventory of club property.  All records were to be given to the successors upon vacating the office. I was accused of denigration when I asked to see the inventory as the records were never received.

One of allegations told to me is that being a member of the Executive Board and a State Committeemen, my Facebook posts “denigrated” Republican candidate for Senate (AZ) Martha McSally.

My Facebook posts were entered under my group “Mobilization of Conservatives®” or my name. The bylaws prevent the clubs from endorsement but there is no bylaw preventing me as a private citizen. Candidates play to a generally uniformed audience and I had the audacity to point to this candidate’s deficiencies. Social media platforms such as Facebook and Twitter are “conducting rampant censorships” targeting Conservatives for violation of “site rules”. Why is this club joining forces with them to shut down Conservative voices?

I was described as disruptive and not a team player.

There is a difference between being disruptive and a dissenter. I wanted to address the shortcomings in their bylaws and was passionate in my belief. They wanted to maintain the status quo, I wanted to challenge it. The Board wanted to re-invite two Republican women. One was suspended from another Republican club because she was the campaign manager for the Democrat candidate. The other woman lost the Republican primary and endorsed the Democrat candidate. I was passionate that these invitations not be extended as these women violated the bylaws and I suggested a bylaw be introduced to address that members who endorse or support opposition party candidates face the consequence of expulsion. I emphasized that 2018 was a significant election year for Arizona. I believed taking this action would prevent the disloyalties demonstrated during the recent bipartisan elections. The President would not allow discussion on my proposed bylaw. A vote was taken to re-invite the two women and I was the lone dissenter.

One of the allegations is that my shout out at the Arizona GOP meeting in Phoenix was not becoming as a member of the Club nor as a State Committeeman.
This club seems to have two different sets of rules: one for the Conservatives and the other for the Republican Establishment. The ranking Establishment members were sitting behind me at the meeting and their shout out was targeted at the Conservatives. I was told directly that the shout out was tempered because of me.

What were the motivations for this coup to remove me as a duly elected board member?
I have upheld the policies and objectives of all of the clubs of which I was/am a member and I have performed the duties of elected office. I have not violated any of the bylaws or standing rules, nor were there any complaints of ethics violations as a member of those organizations. When there are disagreements or concerns the goal of an organization should be “Let’s all reason together”. This club did not present any such opportunity. Investigations are reserved for only the most egregious of offenses. This investigation was based on very shaky grounds, not limited to actual duties not performed or rules broken but on personality issues and ideology differences. They knew I was a principled Conservative and was not a “go along just to get along” type. They were not willing to even try to resolve or work with a difference of opinion. The club expected 100% harmony but to do that, you would have to harmonize with them, you would have to conform. I am not a “good ole’ girl” and I don’t follow the bouncing ball. I didn’t give up my First Amendment rights when I became a duly elected officer of this club, or did I give them up when I became an elected State Committeeman or when I attend a Republican meeting.

Modern democracy is predicated on principles of due process and the assumption of innocence as stated in the U.S. Constitution. How can these clubs call themselves Republicans when they are so unmoored from these tenets? Do they assume the role of a junta? Who needs elections when they can be nullified by opaque bylaws? My forced vacancy was immediately filled by the board until the next biennial election. Any good Republican should be concerned about this type of action.

The Federation is well aware of the shameful conduct of this club and let’s hope it will have the integrity to force the necessary reforms at the local club level.

Thank you Rose for your support !

Myrna, you don't need this club.  You can do and have done much more for Constitutional causes than wasting your time with a group who want to hide what is really going on in the Republican Party.  I'm glad you documented the goings-on, it sounds like Yavapai is an offshoot of the spineless AZGOP and Maricopa County GOP.

Over the last several years I have come to believe the local Republican Womens' groups are more concerned with building their rosters and not really for electing conservative candidates.

The way many of these clubs are run does little good for the State or the Country in my estimation. This is not the case every place they exist. Some have been the rudder helping to steer the local politics back toward the Constitution but it takes a lot of effort to keep the RINOs at bay. I don't think most of these clubs are even trying to maintain the goals set out in their charter anymore. They have become lap dogs for the RINO faction instead of following the charter they were founded upon. Many are nothing more than a coffee club, raising funds for this or that "do good" opportunity and ignoring what made the country great and supporting the Constitution, and Constitutionally minded candidates, and the legacy that would bring to the States and the Country as a whole.

In my considered opinion, altho some would say ill-considered, any worthwhile women's republican club, if they want to be a real republican club, would never be part of the Federation of Republican Women or whatever it is called. I doubt they have changed over the years but they do "charity" work and have socials and parties but do nothing to advance republican principles or the platform.  I bet not 10% have even read the platform.  Myrna has been given a gift when she was run out of the club.  Wear your badge of hone well and I recommend any women in these clubs run for their lives.  The good ones like Myrna will be mis-treated every time. I had a friend in a club in Scottsdale. She invited me to come but cautioned me not to appear to be a conservative. She was one but no one knew it.  what is the point of having principles if you have to hide them to be in one of these clubs?

Thank you Pat, I do wear it as a badge of honor .   I think how topsey turvey this group is. They would rather have women who were the campaign managers for the Democrats or endorsed Democrat candidates in their club and on their board than someone like me .  They have abandoned the Republican principles and with impunity violated their own bylaws.

Groups like [this] are always asking for money and are under the Federation. The Federation gets a large chunk of money from the local clubs so they arent going to do anything. In my case the Federation knew exactly what was going on but chooses to do nothing because they are not going to"  kill "the Goose that laid the golden eggs." "  I wonder what they do with the rest of the money ? Is it used as a PAC or dark money ?  I wonder