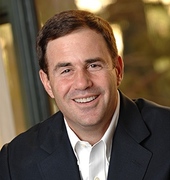 Gov. Ducey has gotten off to a pretty good start with his new proposed budget.  It remains to be seen whether it gets past in tact and can be funded.  It calls for NO NEW taxes.  All fingers crossed!

Was This Just a Setup?

For the time being, it's too soon to take a position on Gov. Ducey.  Let's let him get his Governor's legs under himself for a while.  He is not as experienced in the workings of the Governor's office as past Governors we've had.  We are willing to give him a break... for a while.

While we are glad that finally, Arizona Attornet General Mark Brnovich has taken action against Gov Ducey on his unlawfull and hypocritical mandates, we don't think he went near far enough.  The…Continue

Either Gov Ducey is totally incompetent, or...

Is it possible for an adult to be this clueless?  This incompetent, this foolish or this arrogant?  Not by accident.  It's clear that Ducey is uber-swamp, a puppet to Michael Crow, head of the…Continue

Who’s Really Driving the Bus in Arizona and Where Are We Headed?

It's impossible to ignore the drive for 5G technology in everything from your computer to your electric razor.  The push is on!  But who's driving this bus and why?  We've been warned of the dangers…Continue

Two things to know for sure about Ducey

It's been suggested that there is no reason to add the word "Govrenor" before Duecy's name anymore.  Maybe Dictator Ducey?  Hypocrit Ducey? Chairman McDucey?On July 9, a cadre of doctors implored…Continue

Today, July 8, one of the circulators encountered a woman at a table at the Juniper Library getting petitions signed.  It appeared she had about 100 or so signatures.  Our circulator inquired whether she was getting paid for getting the signatures.  She said yes.  She was a BRAT (Brewer Ruins Arizona Team).  The petitions had a number in the lower right corner that was very large and not the number listed above as the only official number.  Be aware.

Some interesting things happen when you collect signatures.  Here are a few that have been reported:

One young man signed but did not give his house number.  Seems neither her nor his wife knew what it was!  I wonder how they know when they are home?

One woman came to the door holding her pants up.  She couldn't sign the petition, she said, because she was sitting on the john!  OK, I'll pass on that one!

One woman said she would sign if the circulator would help her catch a little bird that was hurt and needed help.  Too bad there was no one with a camera to catch two grown women chasing a little bird around the yard!!  We'll do what it takes to get a signature.

One couple was asked if they were voters.  The young man was able to pull himself together to answer yes.  The young woman just stared vacantly into space.  Multiple requests resulted in that constant, wordless stare.  They were both stoned out of their minds.  Did I mention that they ran a medical marijuana shop?

One woman refused to sign because she said everyone in America should have "free" healthcare.  "I hope you don't get any signatures" she flung over her shoulder!  Too late!!

One family, clearly Hispanic, insisted they were not registered to vote.  When chided by the circulator for not being registered, they finally admitted the whole bunch of them were illegals!

One guy wasn't registered to vote.  He said he was a felon.  OK, see ya later!

At the gun show, the BRATs were there with their fake petitions.  Someone started to chat with them and they admitted the petitions they had were fakes!  Busted!  Then they offered to switch sides if our side would pay them!  Yep, I'd trust them to get my signatures!

One "gentleman" was so mad that he called the circulator every name in the book: selfish, insulting, ignorant, blah, blah, blah!

A different circulator was invited inside the house (it IS very hot out!) and the male homeowner immediately began haranguing the circulator.  Sayonora, Democrat!!  Why can't these people just say, No, thanks?

Signature gathering event in Show Low.  For those of you who are in the White Mountains, this will occur at the VFW Hall on Central just north of Duece of Clubs behind the CVS Pharmacy.  2:00-6:00 Saturday, July 13.  If you can help, just come on over.

New events and locations posted on the discussion above: Events Good for Collecting Signatures.

We need a copy of an actual BRAT petition form if you can get it - actual copy or take a good clear photo of it that shows "Paid Circulator" checked off and BIGGER R1 number - Please make this a priority and get the word out as there may be a way to slow these folks down but we need a copy of their petition.  If you get one or a good picture, please contact Linda B.

Hi all. Just finished another 7 1/2 hours of standing in the heat getting signatures.  I was at Mesquite Library and got about 75 - 80 signatures. The other PAID petition circulator that was there said he was going to get the petition this Saturday FOR the OBrewercare passage.  I wiill be in other locations, but if someone wants to go there and see what he is up too - be my guest.

We still need a copy or good photo of the BRAT petition from anyone in State.

Ted Nugent shout out to the "People's Veto!"

Ted Nugent is going to have a "pulpit moment" and will ask that people stop and sign our petitions.
We need to be there in force!

Looking for some circulators to work the glamorous Chase field. We will need at least 15 persons to work side by side rubbing elbows with Diamondbacks fans as we continue to put a pox upon the cursed Brewer/McComish Medicaid Expansion Fraud.
We will want to meet at Bolin Plaza for a free ride to the field. You will be supplied with blank petition forms [also free] and there are some clip boards [loaned] bring your own for that personal touch. You should think about water, and maybe a hat, not necessarily diamondbacks. We are going to try to rotate positions for breaks and you will work in pairs or more. You will be able to leave [if you desire] with a free ride back to your car at Bolin when the game starts, and the second shift takes over. However, you may stay and work the beer shift after the game.
This courtesy that has been extended to us is extremely valuable and today will be our first day of full on exposure. Yesterday a couple of brave, if not over confident, circulators tried to end the petition gathering by obtaining all signatures needed to end this effort. They fell short, so lets put a full compliment of collectors out there and get some momentum going.

Shuttles start @ 5:00 and will run continuously as long as needed

You need to be a member of From the Governor to add comments!