It's customary for those who do a good job at their elected position should get re-elected.  At the same time, if one fails miserably at that job, they are kicked to the curb.  That is an outdated concept now.  If you are AZGOP Chairman Jonathan Lines, you had one job: elect Republicans in 2018.  How did he do?

For those who are not wonks about politics and how political parties function, every legislative district in Arizona is determined by the not-so-Independent Redistricting Commission.  That happened in 2010-2011.  Legislative districts then elect Precinct Committeemen from their party in the different precincts.  Example, Republicans interested in becoming official, elected party operatives, so to speak, submit petitions to their county recorder to get elected by voters as Precinct Committeeman in the Primary election in August.  Those who get elected are now Precinct Committeemen (PCs).  From there, 1/3rd of those PCs in each district are elected to be State Committeemen (SCs).  The State Committeemen have one coveted job: elect the officers of the political party, in this case, AZGOP.  It happens the same way in each recognized political party.  In odd years, they elect their Statutory officers: Chairman, Secretary and Treasurer.  In even years, they elect every other needed officer, including at least one Vice Chair.

If you are still with us and have not died of boredom, this year, too many districts finagled the election of the coveted State Committeemen.  We can point out perhaps the largest district in Arizona.  The Chairman created a "slate" of those folks that she wanted to be State Committeemen.  Nothing odd about that except it is unprecedented for the Chairman to do that.  It's seen as the Chairman choosing winners and losers which divides the district.  The Chairman should at least assume the appearance of fairness.  The original point of slates, used by many districts, is to get the best, most knowledgeable PCs to serve in this very important slot. There is a process for these elections and in many districts this year, McCain's influence was still in full force.

In this large district, people who have never been to a meeting in their lives were added to the slate while conservative work horses who have served the district for years were left off.  People with no idea of the history of the district or even the party structure will now be electing the next Chairman of the AZGOP.  We can see that is an important job since for the last six years, the AZGOP has been run by the McCain machine.  Seasoned PCs were hoping for a better outcome this year!  Too bad, so sad.

Stay with us here!

The bottom line is simple: the McCain machine will continue to rule the Republican party.  They lost the most important seats in our state in 2016, thanks to the AZGOP: the Sheriff who enforces the law (theoretically) and the Maricopa County Recorder who handles the election department for the state.  Taking failure to a new low, this year, the AZGOP chair continued their downward trend and lost the Secretary of State, the Superintendent of Schools and a seat on the Corporation Commission that rules over utility rates. What we now have in AZ is democrats in charge of the voter lists and elections via Recorder and Secretary of State, the Sheriff who is not likely to enforce any irregularities in elections or pick up illegals who are routinely registered to vote, and they now have possession of our kids!  Good going, Jonathan Lines!  Now go away!

Oh, no.  That may well not happen since the elections in AZGOP the past two elections have been as crooked as a Chicago Mayor!  They use "election by code" on your phone.  Anyone they want to have a code can have one, somewhat like finding boxes of ballots in the never-opened closet at the tabulation room.  We saw this with Chairman Robert Graham in party elections for down-ballot officers, for election of delegates to represent Arizona at the Republican Convention in Cleveland and again when Lines got elected two years ago. Secret codes = corrupt elections.

If we thought district Chairs should not be playing favorites to elect their puppets to be those who elect the AZGOP chairman, take a look at Gov. Ducey: REALLY, GOVERNOR?  You are supporting a total failure?

We call this quid pro quo!  Lines gave Ducey most of the money (set aside for AZGOP to support Republicans, who didn't get more than a pittance to win in 2018) to, you guessed it, Gov. Ducey.  Ducey had a challenger so bad even democrats wouldn't vote for him and he did not need the financial support from AZGOP.  But Chairman Lines likes insurance policies.  It's the way he intends to get re-elected as AZGOP Chairman for the next two years, including the oh, so critical 2020 elections.

Did we mention that AZGOP Chairman and Jonathan Lines supporter, Robert Graham, owned and supported by McCain, did not support candidate Trump in 2016?  It's fair to speculate that Lines will not support President Trump in 2020.

As if it stops there.

"Look out, everyone, here comes the endorsement train"... 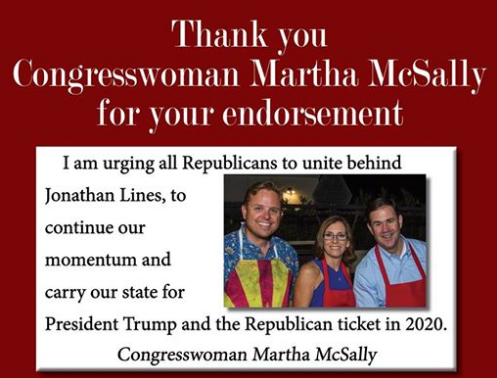 Well looky there: The three musketeers - Larry, Curly and Mo

What the hell momentum does she mean?  The momentum of losing?  Yeah, let's continue that.  It's what they have perfected.

The under vote for Gaynor, McSally & Riggs averaged over 195,000 votes. We don't need to keep the leadership that gave us McCain again in 2016 and failed us miserably this year. They gave us Sinema to continue the path of Flaky Jeff. Time to speak up in January.

as far as I can tell, all three announced candidates are terrible. Who is not going to preach diversity and get amnesia as soon as the votes are counted?  Why run, anyway, when we know that Lines will cough up enough votes for himself as he needs.  Whatever the vote outcome is, the losers better call for Division.  Make them have a roll call vote. Be sure that each vote is counted on the stage and those in the gallery better count them too.  Be sure every vote is from a SC. These people are worse than the dems because the dems don't pretend to be honest.

That transparent, attending-member-only voting process would be ideal, but that is not what Jonathan Purple and his team have in place, sadly.  When SCs, mostly from Maricopa County since it is such a long distance from the meeting locations in Maricopa County, show up with bundles of harvested proxies and vote all of them in a block for every GOPe issue/candidate, it makes it nearly impossible to have an equal voice.  Can they truly say that not one of the proxied SCs in a bundle would support a Conservative proposition? Their call for Unity just means letting them have complete control with no representation of, and participation from, Constitutionalists.

"In December 2012, Republican National Committee Chairman Reince Priebus announced the Growth and Opportunity
Project. As the co-chairs of the project, we were charged with making recommendations and assisting in putting together a plan to grow the Party and improve Republican campaigns. We were asked to dig deep to provide an honest review of the 2012 election cycle and a path forward for the Republican Party to ensure success in winning more elections.

As requested by Chairman Priebus, we made recommendations in the following areas:

We encourage every Republican to read the report and review our findings. Our Party has
an incredible opportunity on our hands, but we must seize it enthusiastically. We are confident
these recommendations and others shared with the Chairman can lead to many victorious
campaigns for our party. We look forward to joining our fellow Republicans in the work ahead.
Onward to Victory."

How can we vote out these entrenched establishment players from the McCain camp when they control the voting system in the state GOP meetings?  At the last meeting there was a large group of Constitutionalists there, and we lost every single vote that came up. The Establishment camp had a number of precinct chairs, mostly from Maricopa County, carrying large stacks of proxies.  I saw very few of the opposing side doing so.  How do you get past the entrenched power holders when they control the election process?  They would not have won every vote without those harvested proxies.

We almost had a bill pass in the last legislative session to limit proxies to "only" two per person, and it passed the first committee but was then summarily yanked by a high-level person from either Lines' or Ducey's office before being voted on by the second committee, where it appeared to be doing well.  This interference by the GOPe is somewhere between just selfishly disrespecting the Conservative side of the party and being outright dishonest.

We need a purge.

Permalink Reply by Arizona Freedom Alliance on December 17, 2018 at 9:35am

Mike, this is very simple if you are a PC... or will become one.  And even if you are not one.  Every district has many empty seats.  Establishment goes after those empty seats and fills them with other establishment paper PCs.  Some of these papers become real PCs and will run for SC.  They then vote for more establishment.  But you know that!  You and conservative PCs must play the same game. Go after those empty seats.  Did you know that any Republican who is not a PC can carry a proxy to a meeting from their same precinct in local races?  And then they can vote your ballot.  If conservatives get busy doing this simple thing, they can take over the AZGOP.  Too late for 2019-2020 but for the next term...  it will come up before you know it!  Even better, recruit those PCs now and start to control the districts that elect all the wrong people.  It starts right there.

Just an example of some of what's out there (and this one's out in the open, maybe even proudly so): 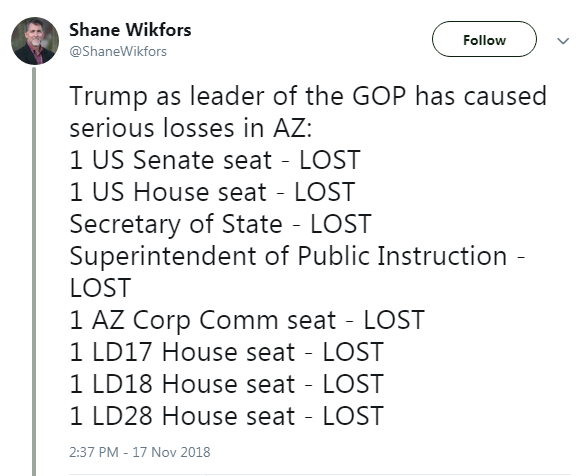 Bwwwaaaaa.  shane Wikfors the model of establishment republicans who runs sonoran [Alliance] something website that routinely trashes conservative republicans. Of Course he's in luv with Flakey, brothers under the skin.  Dont anyone believe a word he says.  What is that trashy website he runs???  Just like a dem - blame everyone but the guilty.  like Trump had anything to do with local politics.  Yeah, he's the guy who uncustomarily kept the Senate and lost the House to cheating.

Little Jonny lines can't win without papa Ducey helping him.  Gotta wonder how much Papa is putting into paying for flyers and stuff.  He owes Jonny a favor since Jonny used the AZGOP PC list to campaign for Gov against Bennett.  Breaking all the rules but who cares, right?  One thug for another as I see it.  Now Ducey gets to put another Republican aka Democrat into the Senate seat and we will be represented by two dem senators.  Looking at S.C. and OK as good states to ex-pat to.