To Americans Everywhere: What Is Really Going On Here

Subvert: to overthrow, destroy, undermine, or destabilize an established or existing system, especially a legally constituted government or a set of beliefs. (Webster’s College Dictionary)

This is a time which calls for complete and unabashed honesty with ourselves. What are we really witnessing with the events of violence being carried out in our beloved America? The vile and putrid display in Charlottesville, Virginia this past weekend is but one more event of such violence intended to subvert our Republican form of government of Individual Freedom into one of a Socialist dictatorship, such as we have witnessed in many countries of the world, with Venezuela being the most recent.

What I believe we are seeing has very little, if anything at all, to do with Robert E. Lee, slavery, the Civil War, race, color, religion, etc. These are but flashpoints for a much bigger and more sinister movement underway to destroy our government of Individual Freedom and Responsibility. For the past seventy five years it has been going on through national politics, peacefully and for the most part, with fair play, supported most notably by the National Democrat Party with a few in the National Republican Party with their beliefs in the Federal Government having close to total control of all aspects of the lives of individuals. It is all about control. Should government be in control or the people in control?

As I stated, it has in the past been a slow peaceful approach of the Democrat Liberal Progressives. NOW COMES THE RISE OF THE VIOLENT LEFT. They are led by basically two groups. Black Lives Matter is the most notable group, but the most dangerous and fastest growing is known as ANTIFA (Anti-Fascist Action). Their violent tactics have elicited substantial support from the mainstream Progressive left, both in government and the media. I will not take the space here to detail ANTIFA, but strongly urge you to research it. I will write more on it later.

As repugnant as they are, the white supremacist group acquired a legal permit, issued to them by the city, to be in Charlottesville to peacefully protest the removal of the statue of Robert E. Lee. The ANTIFA did not have a permit to counter protest. They were sent in to cause exactly what happened. This is not the first time the two groups have had such clashes. This group (ANTIFA) uses these type events to cause riots and violence so as to further subvert our system of government and the ligament election of a president. The real danger is that they are supported by the Progressive Liberals of the Democrat Party and also those within the Republican Party who wish to see President Trump driven from office. President Trump is exactly right, there are two sides to this Charlottesville story, but you are only hearing about the repugnant white supremacists and not the equally repugnant ANTIFA group.

It is widely reported the ANTIFA group is heavily financed by George Soros, and he hasn’t denied it. They have been tagged a Democrat Terror group and is leading what many are calling “The Resistance.” We have heard Hillary Clinton speak of “The Resistance.” Haven’t you all asked yourself in the past, why the Democrats and the so called, mainstream media have not publicly condemned the riots in different places? Their fight is against President Trump, and destroying his America First agenda is their goal. To make America “ungovernable” for the president of the United States. The swamp is deep and very wide. The Alligators and poisonous vipers are fighting back hard. If you have ever stood for anything in your life, you must stand with our president now in these perilous times when he and our Republic is under attack. I urge you to share  with all on your mail list.

Thank you until next time;
John Porter
Harrison, Arkansas

2. Be sure to remove Senator Flake. 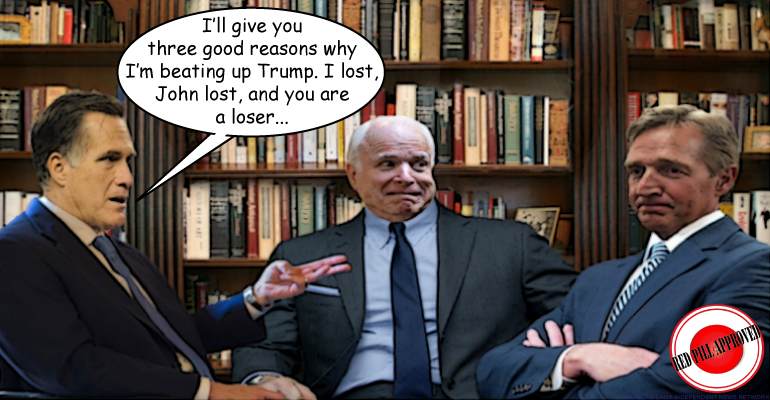 FAKE FLAKE has to go!

[Editor's note: this photo is the work and sole property of Arizona Daily Independent.]

How could Arizona EVER have allowed a person named 'Flake' to be a senator?

This sitting Arizona Senator .... Thinks he is "head and shoulders" above the rest of the citizenry.

Ah, so all those flakes on his shoulders are just his calling card?  Well, they're damnd ruff on his image.

U N Agenda 21 it's still there and President Trump needs to get rid of it.

This saddens me to realize most of this is true.

I don't think any sane American Patriot prefers War.........but when there's an enemy that really wants you dead, we have no option but to Fight to Win.  We must conclude that the Lord God not only predicted this, but set this up for His people to take an active part in their history and future.  It is what it is.