Gov Ducey, you have committed fraud against all Arizona citizens

We, and many of you, knew from the beginning that this covid-19 didn't make sense.  We have joined with others to beat the drum of deception being perpetrated on the world, not just Arizona.  Let's be clear: the Arizona Emergency Act does not exist to shut down businesses on propaganda, to sequester citizens, force illegitmate isolation, even if it's a pandemic exists.  The Emergency Act points to acts of nature, primarily, like hurricanes we see traveling across the Gulf today, to tonados, fires, floods and other real emergencies.  Ducey and Gavin Newsome and 40 governors (more or less) have depended on having us fall for a grand scheme.  Some of them meant well, some saw an opportunity to effect the upcoming election and others just loved the idea of controlling an entire population.

Watch this video, and thanks to JP for sending it in, and you will see you are the willing accomplices to a control mechanism that may become normal.  Already has in some instances.  Control of the population of the United States is unconstitutional on every level and fear-mongering to get that control is criminal.

There have been many reports about this farce but for some reason, the fear instilled in some people by Fauci and Scarf Lady has taken root.  Here's what we suggest: practice civil disobedience.  Take your wardrobe of decorative masks, dig a hole and bury them or have a ritual burning.  Because until we the people stop playing along with this illegal mandate, it will not stop.  Ducey is complict but he's not alone.  Governors who are doing this innocently only because they believe they may kill someone are all guilty to perpetrating a crime.  People have died from lack of actual medical care due to fear and doctors whose doors are closed!

Pay attention in this video where he explains why some of the governors are engaged in this buffoonery and it points to personal financial gain.  Ducey sits on the board of T-Gen that is coming up with a vax.  He stands to make $millions on this mandate.  We doubt he will be sharing that with the victims he has caused by his mandate.  And remember, HE does not practice what he mandated on us: 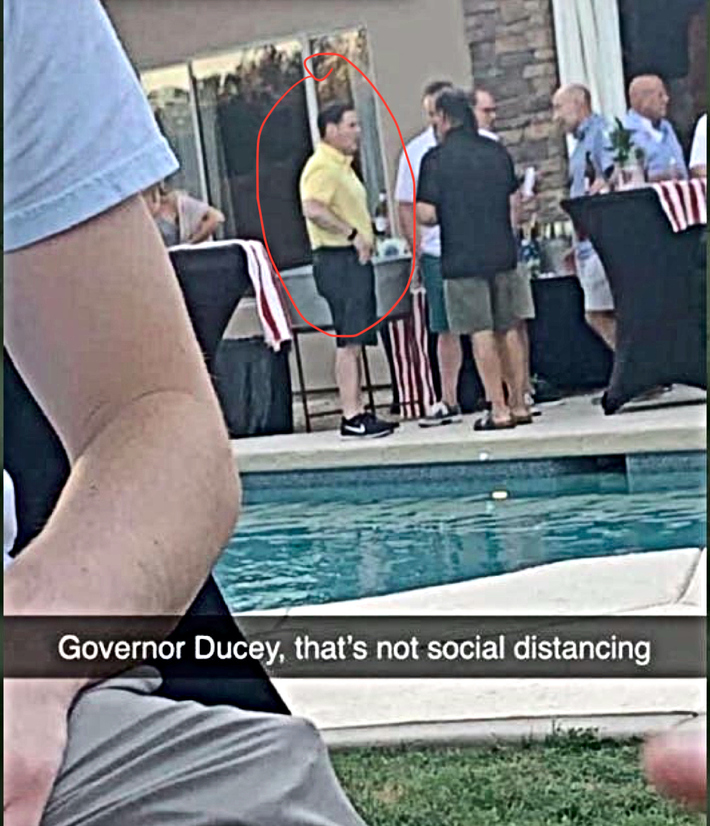 Now, watch this video and take it to heart.  We are being played for fools and it must stop.  It stops ONLY by we the people standing up and saying, "NO STUPID MASK!" Civil disobedience!  Watch it all, to the best part - to the end!

Excellent information. Where is the template letter he mentions?

What Can You Do? – Draft Letter to ACLU, U.S. Attorney for Your District, Congressman/Woman/Senator/Attorney General

To Whom It May Concern:

The Declaration of a State of Emergency and the ensuing lockdown – which exempts persons deemed “essential” without any basis in scientific fact or in Critical Infrastructure definition under the U.S. DHS – violates the legal standard set forth in Jew Ho v. Williamson, 103 F. 10, 26 (C.C.N.D. Cal. 1900). Due to the facts outlined here: http://www.invertedalchemy.com/2020/04/covid-19-anti-trustargument.... 1. The Governor of Virginia could not have known that there was a virulent outbreak caused by a single pathogen (reportedly SARS CoV-2) when declaring the State of Emergency; 2. No scientific evidence has been offered justifying the declaration – mere reporting of mortality and morbidity based on pneumonia symptoms does not an epidemic or pandemic make; 3. The Governor failed to provide adequate testing to confirm or deny the presence or absence of “a novel coronavirus” and, based on recent reports from incarcerated persons, it would appear that positive tests COULD NOT have been based on community transmission as 96% of confined persons have tested positive according to Reuters; and, 4. No effort has been made by the Governor or regional health authorities to overturn the established science published in JAMA that facemasks should not be worn by healthy individuals (https://jamanetwork.com/journals/jama/fullarticle/2762694?fbclid=Iw... E6od7JrZT15U_CJ-OQJo96fMTbZWxuQDc_NGuU) and that social distancing that involves the confinement of healthy individuals has neither been tested nor validated with any science whatsoever. I kindly request that you take this matter up on behalf of the Citizens of Virginia.

Here is the template

I see this has had 380 views, but very few responses. I certainly hope you are all taking this VERY seriously and WILL write letters, make phone calls, etc!! We have been lied to! They are trying to muzzle us!! To quote the article:  "Here's what we suggest: practice civil disobedience.  Take your wardrobe of decorative masks, dig a hole and bury them or have a ritual burning.  Because until we the people stop playing along with this illegal mandate, it will not stop.  Ducey is complicit, but he's not alone.  Governors who are doing this innocently only because they believe they may kill someone are all guilty of perpetuating a crime.  People have died from lack of actual medical care due to fear and doctors whose doors are closed!"  Emphasis added. NO VACCINES, EITHER!!!

The Arizona Constitution’s Article 2, Section 5 states: The right of petition, and of the people peaceably to assemble for the common good, shall never be abridged.  Don’t churches “peaceably assemble for the common good?” Don’t people that go to a restaurant?  How ‘bout those that go to a bowling alley? Or to a movie theatre? And any other business?  And what gives the Governor or any health official the power to determine which businesses are essential and which are not? All legitimate businesses are essential to those that own and/or operate them.

The Governor’s executive orders limiting the right of Arizona citizens to peaceably assemble are illegal.  The statute they cite, ARS Title 36-787: “Public Health and Safety. Public health authority during state of emergency or state of war emergency,” does not authorize the shutting down of the Arizona economy by closing business or limiting their activities. Period!  Additionally, nothing in the statute authorizes the mandating of the wearing of masks.

The above is the substance of correspondence I’ve sent to Attorney General Brnovich, asking him to inform the Governor that his actions are illegal and those mandates should be revoked immediately.

Permalink Reply by Franklin Thomas Fiedler on September 16, 2020 at 9:06pm

I too have filed a complaint with AG Brnovich in the form of a notice for Governor Ducey to cease and desist continuing the COVID 19 State of Emergency order.

I received a prompt voice mail from the AG's office suggesting I take up the issue with the U.S. DOJ. That makes some sense to me as the Executive Branch of the AZ State government may not be in the best position to contest itself ( i.e. AG vs Governor). However, I filed similar notices to Maricopa County Sheriff Penzone and Phoenix, Mayor Kate Gallego copies of which I link below:

I am planning to follow up on a notice to the U.S. DOJ and sending notice copies to Mark Brnovich of those lower divisions of the State government. All correspondence sent certified mail return receipt, of course.

It is my hope and prayer that readers of this will take similar action. Feel free to use my correspondence as template, or whatever one deems to be an improvement upon it.

In it he states, "...Whereas, in Arizona, public health care systems have identified precautions and interventions that can mitigate [emphasis added] the spread of COVID-19; and

Whereas, the Arizona Department of Health requires a more robust and integrated response to successfully combat the COVID-19 outbreak; ..."

Has the governor not changed the purpose of the State of Emergency from "mitigate" to "stop" the spread of COVID-19 in his orders of June 29 and July 23, 2020? Is this not the fraud and bad faith that is ruining the livelihoods and businesses of so many in the hospitality and transportation industry here in Arizona?

Please be a copycat and give Ducey some more of the same from yourselves.