The anti-everything Constitutional groups can mobilize in a matter of minutes to protest, protest, protest.  ALEC is a consortium of Republican lawmakers from around the country, gathering to discuss policy issues at the level of state Legislators and Assemblies.

Word is that the Election Integrity Project™ Arizona, LLC is on site to encourage lawmakers from states across the country to tackle this issue.  Election Integrity Project™ in all four states where they are operating are not about "watchers" as has been stated on this website.  No, not at all.  We suggest those interested in cracking the case of corrupt elections contact them at mgr@eipaz.org or secty@eipaz.org for more information and to learn how supporting this organization is a good thing for Arizona.

A small group of activists gathered on Wednesday to protest the annual policy summit of the American Legislative Exchange Council in Scottsdale, Arizona. Representatives from at least 10 organizations spoke at two press conferences held throughout the evening event.

The coalition’s attorneys filed suit on Wednesday alleging that legislators have violated Arizona’s open meetings law. They claim that quorums of at least five legislative committees were formed while attending ALEC’s policy summit.

Protesters carried signs that read “ALEC GO HOME,” “LEGISLATORS SOLD HERE,” and “RED FOR ED.” People joined together to chant “When public education is under attack, what do we do? STAND UP FIGHT BACK” and “Immigrants are welcome here.”

Thank you to Arizona Daily Independent for running this expose` Click the link to read more.

This photo tells it all.... the great unwashed progressive wannabes are the most ill-informed people in America.  Do they know their "leaders" are after THEM, too?  Just look again at who is actually sponsoring this so-called 10-persons protest? [above] 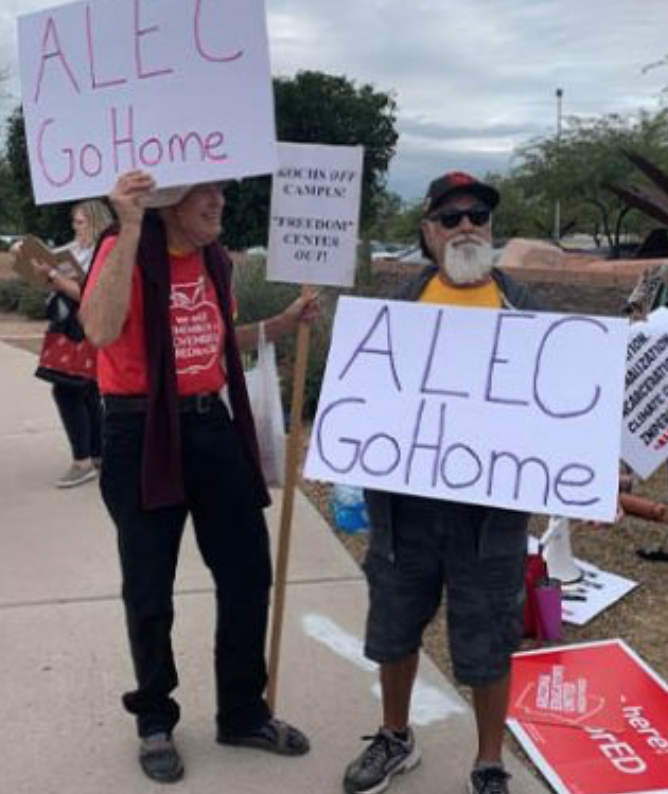 Thank you. Here, also, is a link to an article from Breitbart. The article lists the lies that the Prog Communist movement #RedforEd is trying to hoodwink the public into believing.

We can win this war, but in order to, we must fight back. Fortunately, our side seems to be organizing, recruiting and getting active!

I am shocked to see AZ going blue as one raised in AZ 1947-67 before CA move. CA is self-destructing as is AZ! The massive exportation of four generations from public schooling 1960-2019 is now a voting majority as elders die off. It's not Trump! It's pervasive mediocrity K-16 WE the taxpayers of America support locally, statewide and nationally out of equally pervasive ignorance on this issue of failed public schools WE pay for & consign without choice 80% of America's children to for 12 years or more!!!