[Editor: There is a reason McCain is know as the most hated man in the Senate. He has plenty competition but voters are basically ignorant.  They just vote against themselves time and again because they won't pay attention. So they vote for the party or they vote for the familiar name.  This year, countless informed conservative voters, PCs, Trump supporters, voted for McCain in the general!  Yeah, we heard all the justifications but tell us, what good has it done. He's a worse obstructionist than the Dems.  In fact, he is a Dem in Republican clothing.  Imagine, if you will, how easy it would have been to take out Flake if we first had taken out McCain.  We would have taken the AZGOP Chairmanship but no, gotta vote for the nasty Republican!]

Having confronted these Decepticons within the GOPe wing of the UniParty for a decade, ultimately their actions become predictable. [<-----This is the guy McCain paid Dems to vote for in Mississippi against a solid conservative!]

It is the same cloistered crew, in the same Corinthian Chairs, around the same table of deceit, behind the same mahogany doors that holds the key to the coin… every time.

WASHINGTON DC – Sen. John McCain (R-Ariz.) announced Wednesday that he will not support Rep. Mick Mulvaney’s (R-S.C.) nomination to lead the Office of Management and Budget.

“Under most circumstances, I always give the benefit of the doubt to the incoming president … so it is with great reluctance that I came to the floor of the Senate to rise in opposition to the nomination of Mick Mulvaney,” McCain said.

McCain, the chairman of the Armed Services Committee, said he was opposing Mulvaney because of his previous positions on defense spending. He accused the conservative lawmaker of working to “torpedo” Senate efforts to increase defense spending (link)

The issue is not about Defense Spending, the issue is control over the ledger.  You can’t run around the world causing chaos, toppling regimes, bribing friends and enemies etc., if you don’t have control of the checkbook.

Senator McCain views any measure that would confront or diminish  his ability to indulge his globe-trotting usurpation’s as a threat to his turf.

See any Republicans in this photo? 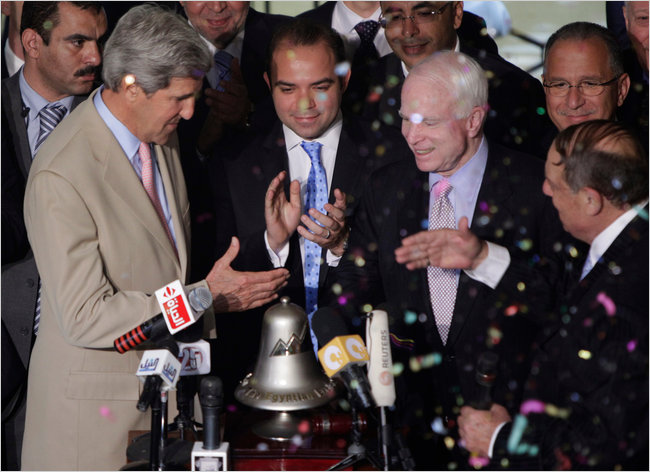 I am sooo ashamed of McCain & Flake!  Mcshame hasn't had my vote for a very long time, lets say not since he was a 2nd term Sen. & his cohort loony tunes Flake only once! Had a bad feeling when he spoke to our group White Mountain Conservatives before he was elected but at that time, I didn't realize just how close he was in mcshame's pocket!  I personally will do whatever I can to not get him elected again!  Two losers that need to go away!!!  Love the new title "Swamp Guardian"  perfect fit.

When I was in the Navy they stressed the that we had an obligation to give only name rank and serial number if captured. I do not think I would have resisted any more than Mc Cain. I honestly think they were very successful and he is the Manchurian  candidate.

We need to run someone else to replace Flake next election.

Read the post we put out this morning and you will see that Kelli Ward will once again prevent getting rid of Flake: