NOTE:4-12-19 For those of you who did not see the previous articles on this subject, please see additonal information on this topic added to the bottom of this  article

Doug Ducey couldn't sign this bill fast enough. It appears he was dying to.

C. No district shall include in its course of study instruction which:

By removing that critical language, all Arizona Schools will be required to:

3. Insist that all kinds of sex are safe

Whoa! aren't we jumping to conclusions? Absolutely not. Whenever you give Marxo-Fascist radicals a millimeter, they will take 1,000 miles. Your children will now, without the troublesome complications of laws, be groomed for homosexual pedophile consumption. How can i make such a statement? Here is how:

We teach them math because we expect them to do math

But what if you don't want your children to embrace radical self-destructive lifestyle choices?

Then you shouldn't teach them this crap. But, you can't stop it now. If your children go to any Arizona school, they will get this indoctrination. The indoctrination has already been going on behind the backs of parents as we have seen recently in the Cave Creek School District. But, now, they have the blessing of the state.

Here is the recent press release from The Arizona Superintendent of Child destruction:

Superintendent Hoffman to Host Press Conference for Passing of SB1346

WHY:           Arizona Superintendent of Public Instruction Kathy Hoffman will host a press conference to congratulate the Arizona Legislature for passing SB1346, which repeals anti-LGBTQ policies from the books. At the press conference, integral members the legislature, as well as stakeholders of the LGBTQ community, will speak about what a monumental step forward this bill is for treating and educating all children equally.

DETAILS:   Governor Doug Ducey immediately signed this bill into law after passing the Senate this morning.

UPDATE 4-12-19 Since many of those who read this article did not read the previous ones, here are the particulars on SB1346

This is what was removed by the house vote on SB1346:

C. No district shall include in its course of study instruction which:

This is how the vote went down: 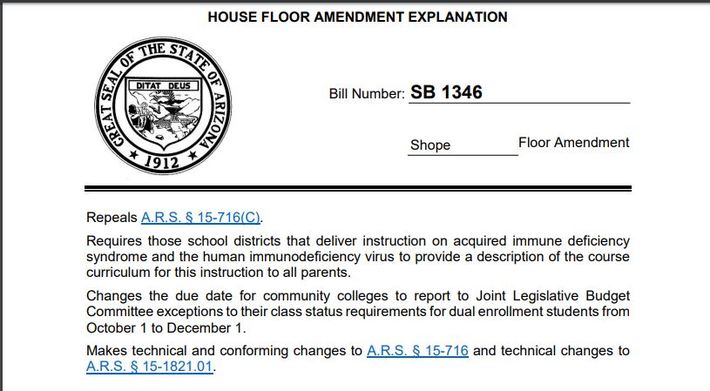 Here is the link to the entire bill: https://apps.azleg.gov/BillStatus/GetCalendarBillAmendmentPdf/?cale...

The organizations sueing Arizona for in Equality Arizona v. Hoffman are

More about Lambda Legal: The folks who are sueing the schools and want to convince you that Homosexuals have a healthy lifestyle die of AIDS:

Based on the cases Lambda Legal have brought against various people and entities, one might conclude:

Does anyone have any rights except for these people?

And BTW, whatever happened to reading, writing and arithmetic? Apparently that is no longer important

Senate Republicans who voted to put material in the hands of young children that will confuse them and perhaps, harm them at an early age.  This is a massive turn to the left for Arizona.  Everyone of these lawmakers who voted for this should be primaried out!  If we lose the legislature, what difference does it make when Republicans vote is such horrific ways?  Oh, you say, we will get much more of this?  Possibly because these dems and some of the GOP are constantly vote-seeking and the R's are seeking moderate dem votes.  The AZ Legislature should hang their collective heads in shame.  But they won't.

I can't find anything in the two different Bills that are quoted here as being the topic of discussion.  First one he list is SB1346.  This is relating to "School, charter school and school district 4 accountability; annual achievement profiles; 5 classification; letter grade system; profiles; 6 appeals process; failing schools tutoring fund; 7 exemption;"  Nothing to do with instruction of sexual education topics.  The next one is SB1386.  This is on Child Care waiting list and appropriations.

I believe the bill you're referring to is SB1415.  The options for parents is take you kids out of public schools and home school them if possible.  I realize this isn't an option for a lot of families, so fight hard at removing those that voted for it, preventing the governor from advancing, which is his goal, attend school board meetings and run for office!  Please.  Also, get together and file a lawsuit.  This is wrong.  Rick Gray is my Senator in LD 21.  He had on his signs this last election "Voted for Teacher Pay Raise".  What does that say with his current vote?

The language that is removed from ARS15-716C by SB1346 is above . Please read previous 5 articles on the subject posted in this group. There are many links there. I think there is a misprint in the Press Release. The title says SB1346, which is what this is about but it says 1386 later; which i think is a mistake

Randy, this bill, SB1346 (the actual bill number) is a Stiker Bill.  The original short title is about school meals but it was going nowhere so it was taken as a striker to run SB1217 that was also stalled.  This is common procedure and we always have to watch what Strike Everything (as they are listed on the website under the Bills tab) bills are being used to hide bills that are not palatable.  There are usually some changes from the original bill being used as a striker but all of the language from the original bill is struck and new language added.  Read the most recent version and you will see the actual language.

(But what about the citizens of Arizona?)

Time to starve the beast: remove your kids/grandkids from public schools.  Yeah, I mean forsake that big vacation, new car, country club or sports club membership or eating out at fine dining places.  It's not just for them but also for the country. It's THEIR country.  When school enrollments sink, so will $ sink and schools will close.  BE brutal, parents.  Except to your children.

I like your attitude. We need more of it!

I agree with Starve the beast, Jaspersgoat. I had a feeling you were a good man...

We home school and spend way less than our property taxes doing so ... No need to give up Big Vacation, just use your vacation to educate. We took our child on many vacations and he wrote reports on them. One being the Inauguration of 45 for our field trip in Government class...It is inspiring instead of requiring. I drive a new car to and from our Homeschool coop groups. Our son is in a Shakespeare play tonight and tomorrow night. We sold tickets to pay for most of the costs. The economics are taught to the children as we go.

Our son tested post high school on 3 of the 5 tests the district did to place him for 11 year olds. He tested 9th and 10th grade for the common core math...

We are taking enrollments in about a month if anyone is interested. Cross streets for our building is Gilbert and Baseline, however there are coops all over the valley. We encourage you to read the book "The Thomas Jefferson Education" and we have classes on mentoring your children and heading a class with another parent. We like all classes to have the two deep rule.

Why, thank you, Susan.  My mom thinks I'm a good guy too.  I don't have school age kids or grandkids but I know everything hinges on the kids in today's schools. I have a dear friend who ran an excellent charter school but the SPI gets in the way of what they wanted to do.  I know not every family has to give up some of their goodies but many do, esp if they can't home school.  Your son is a very blessed young man.  Keep up the good work. He's getting an education on life as well as academics.

Randy:  Thanks for the clarification.    The "What" in this article should be SB 1415 not 1346."  How do we get the original language @ "C. No district shall include in its course of  study instruction which:" re-inserted in bill SB1415?  It seems that the typist just missed that sentence and the letter "s' in the words "Promotes", "Portrays" and and "Suggests".

No it is SB1346 Read the previous articles on the subject in this group: