Today is the last day to make $5 donations to Clean Elections candidates.  The donations can be made until the midnight deadline.  The only candidate we know of who is still on the Clean Elections program is Gubernatorial candidate, Ken Bennett.

As we know, there has been quite a contentious campaign against Gov. Doug Ducey who has refused to be seen with Bennett.  That could be because he believes he is ahead and why should he give his opponent any press.  Or, it could be that he is trailing and he also would not want to give his opponent a press opportunity.  Only those candidates who are clearly ahead can be magnanimous!  Our guess, and it is just a guess based on past history, Ducey is worried!

Tonight, we have learned that today, the last day for $5 donations and a day that traditioonally attracts a surge of donors at the last minute, often between 3:00-8:00pm, the Clean Elections website stopped taking donations.  We have had reports from some who tried to get on the site to make a donation but their information was rejected.

We contacted the Bennett for Governor campaign to find out what was going on.  They confirmed that indeed, they have learned that hundreds of donors have reported in that they could not get on today, August 21, the last opportunity to make those donations online.

The Bennett campaign is in touch with their attorney to see what recourse he might have.  More than $800,000 is on the line and the past few days, we have seen videos of appearances by Bennett making a last strong move to close the gap of needed donations, saying Sunday afternoon that he still needed "100s" of $5s.  It seems that "100s" of potential donors could not complete the transaction, leaving Bennett short of the goal to receive the funding.

Said one person we spoke with: 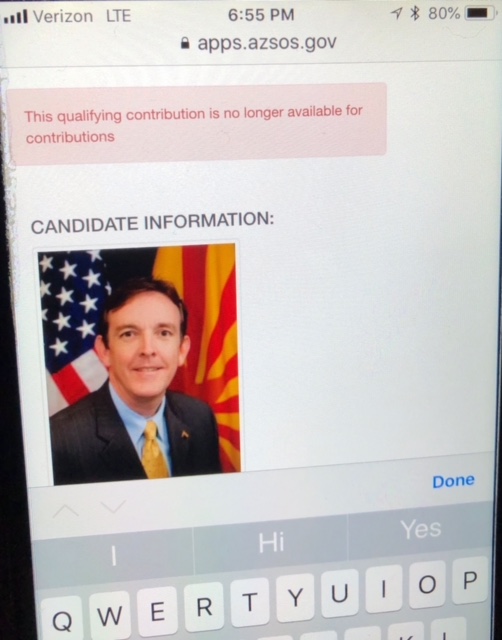 "I just signed in and this is what's on my computer screen.

[Also, in a follow-up email: the only button that looked to be working is the button for me to take back my $5.]"
Here is a screenshot of one attempt well after the site went offline.
#
#
#
#
#
#
#
#
#
#
#
#
#
#
Yet another person sent a screenshot of success in getting on.  This was after quite some time and several attempts.  Most people would just give up but this particular donor was determined to do their best to make that donation (name of the donor has been blocked out): 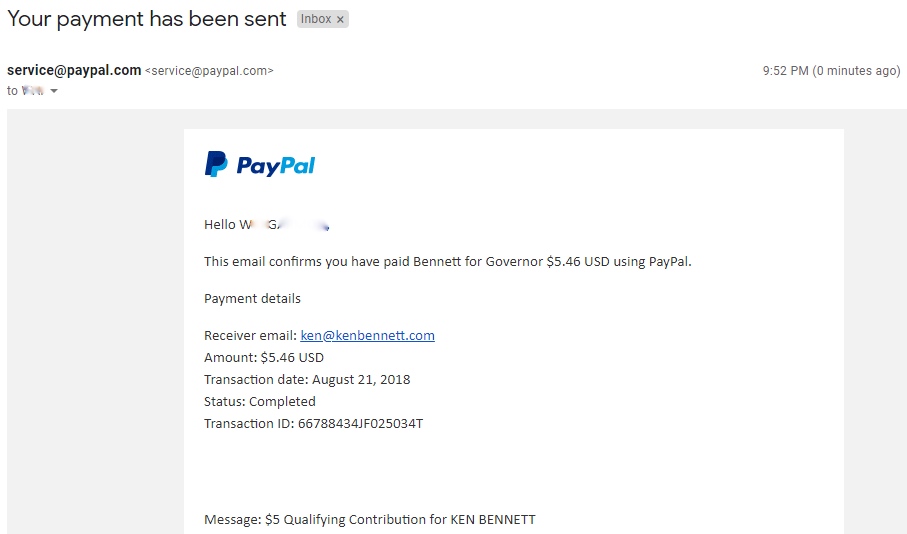 We have been unable to determine who shut down the Clean Elections site on the last day for donations to be made.  At 10:19pm the Bennett campaign contacted us to say this:

"Reports coming in that online $5 contribution is back up! Guess you are now suppose to wake people up to give !?!"  The frustration for this campaign must be enormous.

Stay tuned for the latest information. The Bennett campaign said when they find out just what happened, they would report in and we will report to you.

You might wonder why this is such a big deal. Only one candidate running clean this election got enough $5s to qualify for the funding among the many who filed to run "clean."  All others except Bennett withdrew from the Clean Elections program because it is so hard to collect $5s.  One would think campaigns are asking for their first born instead of only $5!  That candidate only needed 1500 donations while the Governor candidate needs 4000 - quite a hurdle to clear. However, there is some reason to believe that the goal may well have been met today. Again, $800,000+ in funding to Bennett is on the line.

What the hell?  These candidates work so hard to qualify and the CE site goes offline on the most important day of the election period???  Everyone knows how we procrastinate on these things!

Could the site have been over loaded??

I doubt it. It seems to me that a State site should be able to handle several inquires at a time and given the fact that it probably only takes maybe 10 minutes to get a donation done they should have been able to handle several hundred per hour and Ken B. would have the number he needed in just a few hours which is why I believe someone must have been there actively bouncing donors out and slowing them down. Or it is possible that someone in Ducys team set up a bunch of people to tie up the website for hours not donating anything but locking it up so legitimate users could not get through. Sounds like a McCain tactic and Ducy is in on that game for sure. I will see if I can find figures for the hourly activity. In the old days there were sites that tracked that kind of thing, I hope they are still around.

One of the problems with electronic voting or donations to a campaign is that it is in the hand of people who, potentially, don't want us or anyone like us to win and will do anything they can to defeat us and our candidates. It is virtually impossible to tell what might have been done to cause this or to reroute or erase these donations  through out the campaign much less something like this guy or gal not being able to get the computer to take the donation on the last day or two. It could be that he was on track to just make his quota and the operators realized they only had to sideline about two percent to prevent this candidate from qualifying for the program. Wether politics or money, and this is both together, either one is enough to cause people to bend the rules or cheat. We have seen the Republican party heads do a version of this at the last big meeting in Phoenix to pick the delegates to the convention in 2016. All done on a laptop in the back room by Robert Graham and his cohorts with us all trying to text our pics on borrowed laptops or our cell phones with no possible way to guarantee it was not rigged from the first moment. All we could do is trust they didn't lie and that the vote we put in was tabulated for who we were told was behind number x. Every vote needs to be on paper ballot. Every donation needs to be done independent of anyone who might wish to reroute or block it. We need to be able to verify by recount ever vote, which electronic tabulation can not guarantee when every vote is zeros and ones inside a computer and we can only take someones word for it that it turns out this or that way. Further we need to put teeth into vote fraud laws with steep money penalties and stiff jail time for anyone caught cheating with no possibility for shortened jail time and a lifetime ban on any political work or voting for those convicted.

Does anyone else wonder why this happens only to republicans?  As to overloading the computer, it's stated that only one candidate in all of AZ is still looking for 5dollar contributions. If that overloads the system, there is something very wrong with the system.  If it requires 4K donations, it should be able to take every one simultaneously. My rat detector is going off.

It is the Secretary of State Michele Reagan's website. She is controlled by Ducey you know.

Why do you think there is a problem? Ken Bennett is a very great Candidate to win the Governor race.

Oh, this seems to be the year to blame everything on Reagan.  I know you can do that through AZSOS e-qual but I don't know if Clean elections runs that part or if it is linked to CE or something else.   I don't think Reagan would do such a thing for Ducey.  I don't see him supporting her but she was friends with Bennett in the past.  Let's wait and see.  Could be John P is right, no way to trace it.

Yeah, Pat, I'm with you.  I think we should refrain from pointing to any source until more info is at hand. BTW, I was so put off by Gaynor's ads that I voted for Reagan and so did most of those in my precinct.

so I've been thinking about this.  Something is up with this.  Who stands to lose or win?  Well, maybe someone in the AZSOS office was paid to ruin Reagan and this would be the final nail in her coffin to blame her or her office.  And/OR, what if Ducey knew he and Bennett were very close and if KB gets his $5s, he would be in a good position to run in the general.  There has not been a word from Ducey crowing he's way ahead. But if KB doesn't get his $5s he would not have the money to beat David Garcia.  So people decide to vote for Ducey to have a better shot at the dem.  Far fetched?  HA!  We've seen the lengths the establishment will go to.

Ken Bennett is well enough known in Republican circles to get it done. The question is can we get Republicans to the poles in an off year election. This seems to me to be the main problem in Arizona politics. I have tried to get people interested in becoming PCs and helping with the job but it is a hard sell and I am no salesman it is obvious we need a better plan to get Constitutional Conservatives to the polls with the right information.

Pat J, you might be clairvoyant.  If so, we would like to put you on our team.  We have info that a Ducey person was deliberatly put into the AZSOS office earlier - with resistance from the Secretary -  whose job would be to maintain the e-qual system.  We do have additional info on this but don't have permission to share at this time.

The McCaine/ Ducey machine is working .