Trump's NOT our Candidate! 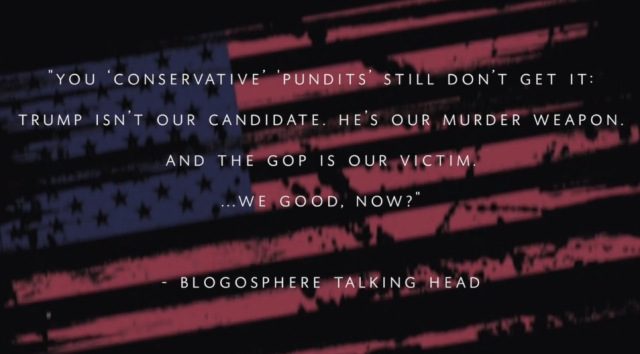 I think we could lighten up a little.  And I'm not even Republican....

I would only add - RNC Establishment Elites and Chamber of Commerce corporate cronies - after the word "GOP".  If Donald Trump can take out that den of thieves in both parties, the American People will have a chance for continued greatness.

Trump isn't going to murder anything.  He is going to flip into a crony capitalist so fast it'll make your head spin.  Why? Because he already is one. Ted Cruz is the guy who will kill the GOP.  He just needs some backup.

All Cruz will kill is the American worker with his increase in H1B visas while 93 million American workers are unemployed or under employed. Anyone who wants bring in more foreign workers to compete with American for jobs in this weak job market is working for big business, not Americans.

Permalink Reply by Elisa desGroseilliers on October 1, 2015 at 4:05pm

The reason some people are cheering for  Trump right now  is because he is his own man. He is not owned by anyone, he's using his own money.That's what his followers see in him plus he pushes the right buttons on illegal immigration and other pertinent issues.  They see  someone who will do what's best for the people and the  country instead of  what's best for him/herself . We have been duped for too long a time by  having no choice but to  vote for a leader chosen by the elitists in the Republican Party. We now have seen the results. No matter if we give them the House, then the Senate, they still don't do what they promised to  do when they were campaigning. And on another note, if they knew their promises would not be kept, then they out and out lied which is  no surprise. And yet voters keep believing these lies and vote for he same people over and over again, not even realizing that strings are being pulled to get the same results- all the time. Now it seems many have woken up and are supporting "outsiders"  like Trump, Carson, and Fiorina. Cruz has been in politics, but since he's been fighting the establishment all along, he is still liked a lot by many.

This is hilarious, and true, too.  I don't get why the Cruz people think Cruz is the ONLY candidate who is the true conservative; the Carson people think their candidate is the ONLY candidate who is the true conservative.  Cruz tried to give away 500% more American jobs to foreigners through his H1B bill.  That's conservative?  Leaving our own workers in the dust.  Carson does seem to be pretty conservative but he's not too sure on foreign policy and what to do and whether to ramp up the military and maybe we should just stay out of wars.  That is politispeak for being an isolationist.  Reagan was right, peace comes through strength, a strong & ready military never needs to be used!  We no longer have a strong military.  But I was cheered by Jack Keane saying the generals are getting fed up with Obama.

This I know: ONLY Trump has the will, the guts, the disregard for and the resources to crush the RNC. Maybe the DNC will be on his list, too.

Well, he's mine and a whole lot of voter's choice!

Love it... but I would have left out the word 'murder' because killing in self defense isn't murder. (Sharing this in AZ 4 TRUMP on Facebook & Twitter.)

Carson is also an illegal-alien-should-get-to-stay Repub like all the rest.  Even after coming to the Cochise County border and talking to the Border patrol agents, the ranchers, our Cochise County Sheriff Mark Dannels and seeing the mess for himself he came up with the same Repub BS to placate the Latino lobby.  On 9/2/2015 as reported on American Thinker

"....Dr. Ben Carson said America’s borders must be sealed to protect against terrorism and told a prominent group of Latino elected officials that he also supports giving illegal immigrants a path to legalization and eventual citizenship. Regarding the country’s illegal immigrants, Carson said, “many of them have never known any other country … so where are you going to send them?”

Any candidate that thinks for one second that illegals want citizenship is a fool.  Illegals want status that will not get them thrown out until they are ready to go on their own.

Any candidate that thinks for one second that they will pay any back taxes is a fool.  Illegals will never provide any paper work that will require them to pay anything to the IRS except to collect all the back "Earned Income Tax Credits" that Obamas executive amnesty gave them.... remember that was the reason that the Repubs had to take back the Senate so they could cut that out of the budget??  Remember that the Repubs DIDN'T do that twice within 60 days?? and they didn't just do it this week either when they had the chance to!!

Any candidate that thinks for one second that you can't deport 11 million illegals is a fool.  First, because there are over 30,000,000 illegals, and, second because enforcing the immigration laws that are currently LAW will send 25,000,000 out of here within 6 months. A few select cases of employer sanctions and killing all sanctuary cities will send the last 5,000,000 out of here in a year.   Mission accomplished.

Let's be clear that there is only ONE candidate that has the huevos big enough to even talk about getting rid of illegal aliens...... and the establishment rinos and the DC cartel are shaking in their shoes...... Boehner is his first, but not the last, casualty.