The Jeffersonian Trump Flying Under the Radar….

Meanwhile it takes days before anyone in the swamp, and that specifically means those who report on swamp activity, fully grasp the scope of what is actually being done. There’s a good reason President Trump put a portrait of TJ in the Oval Office:

[…] When Trump promised that as president — on “day one” — he would begin to dismantle ObamaCare, some Republicans, many members of the press and most Democrats laughed at him. They are laughing no longer because the first executive orderhe signed on Jan. 20 directed those in the federal government who enforce ObamaCare to do so expecting that it will soon not exist.

[Trump] ordered that regulations already in place be enforced with a softer, more beneficent tone, and he ordered that no penalty, fine, setoff or tax be imposed by the IRS on any person or entity who is not complying with the individual mandate, because by the time taxes are due on April 15, the IRS will be without authority to impose or collect the non-tax tax, as the individual mandate will no longer exist. Why take money from people that will soon be returned?

Then he ordered a truly revolutionary act, the likes of which I have never seen in the 45 years I have studied and monitored the government’s laws and its administration of them. He ordered that when bureaucrats who are administering and enforcing the law have discretion with respect to the time, place, manner and severity of its enforcement, they should exercise that discretion in favor of individuals and against the government.

We would be failing in our due diligence if we did not point out a history of UniParty affiliations and the subsequent willful blindness.  First, today’s UniParty useful headline:

WASHINGTON DC – House Oversight Committee Chairman Jason Chaffetz (R-Utah) said he has not witnessed any signs of the national voting fraud that President Trump has claimed.

“On the voter fraud issue, that really happens at the county level,” he told reporters Wednesday, according to CNN. “I don’t see any evidence.”

“But the president has 100,000 people at the Department of Justice, and if he wants to have an investigation, have at it,” Chaffetz added at the congressional Republican retreat in Philadelphia. “I just don’t see any evidence of it.”  (read more)

Ah, yes, there’s Rep Chaffetz coming out of the shadows to protect the swamp – again. 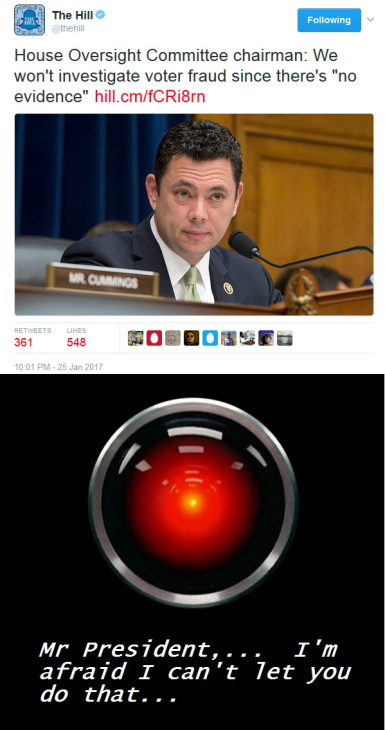 Oh yes, there’s a history here to track the exact moment when Chaffetz joined the UniParty.  That moment when he retracted his challenge to Senator Hatch and took the payoff from the U.S. Chamber of Commerce in combination with the McConnell constructed promise of a major House Committee chairmanship if he removed himself from the equation.

This is all to true. The "New World Order" Geo. H W Bush mentioned several times during his tenure in the office of President should be proof enough that many in government service are serving not our country and its people but some other master or ideology unknown to the public and voters who have elected them. Wether called by the name Council on Foreign Relations, Trilateral Commission, Bilderberg Group, ILLUMINATI, Hidden Hand, Club of Rome, United Nations, Fabian Society, American Humanist Assoc., CPUSA and a hundred lesser known groups and clubs which claim men and women, we elect to office as members, who are fellow travelers in the cause of a one world government, a world without borders.

The hallmark of this type of, One World, Government is a Supranational organization, like the United Nations, which has little control by the citizen of the Nations States in membership and is in fact much more governed by a small group of "Elite Establishment" not chosen by the citizenry of any country. These Establishment Elite in fact generally choose the representatives in attendance for our country and many others through influence they have with our elected like Mr. Chaffetz, John McCain, Jeff Flake, Lindsey Graham and hundreds if not thousands of others going back almost a hundred years to the League of Nations, and more than two hundred in the case of the ILLUMINATI who were run out of Austria for their plot to overthrow that government in the late 1700s. There is power is secrecy and the societies who rely on it know that well, our own "Federal Reserve Bank" was just one of the successes of this secret influence and scheming like the European Union which was established in secret and installed without the consultation of the people within the countries affected. These are the creatures of the swamp at it deepest level, more money and more control for them leads us to the same kind of trouble we are seeing in Europe with the radical Muslim take over in France, Germany, Belgium, Norway, etc. etc..  England may escape only after voting for BREXIT and it will be a fight they will still have a lot of problems to over come. The NWO doesn't give up easily as we are seeing here with the comments in the press and by our elected swamp dwellers regarding the changes our new president Donald Trump is making.

I recommend we all keep praying for our country and our President, the slimy hand of evil will not let go easily and we need the help of our Devine and Loving Father to defeat it, on our own we can barely make out the fringes of the system of corruption which has seized us and our country and in fact is in control of most of the Governments in the world.