A Split Among Conservatives: A Closer Look at Solar "Net Metering"

Arizona's "Net Metering Controversy" is gaining national attention.  It is an issue that has split Republicans and Conservatives down the middle. Some, like Senator Russell Pearce, are siding with regulated monopolies like APS. Others, like Barry Goldwater, Jr., favor solar-based competition for APS and consequently find themselves siding with Left-oriented groups who favor solar for its alleged environmental benefits.

The Arizona Corporation Commission (ACC) will hold hearings in November on Net Metering. Which side should a Conservative support? In the essay below, I take a closer look.

Bottom line: I end up favoring the side of the pro-solar advocates. It's not unqualified support, but it is about a 90-10 split, in my view. 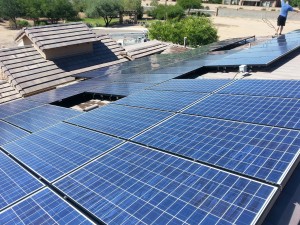 Summary: If the ACC truly wants to represent power utility ratepayers, they will make very certain that any changes to net metering do not destroy the economic incentives to install residential solar. That competition will restrain rising power utility rates much more effectively than the ACC’s oversight alone. The ACC should not be swayed by specious claims about "fairness."

Over the past couple months, political-style attack advertising has been running on TV and radio for and against "net metering" for solar customers. The attack-ad vocabulary includes terms like "free ride", "fair share", "subsidy", and so on.

Under current net metering arrangements, solar customers pay nothing to their power utilities for solar energy that they generate and consume themselves. Further, when they "export" surplus energy to their neighbors, the utilities are required to compensate them with energy and cash credits on their utility bill.

Utilities say that customer-generated energy and those credits end up shifting power plant and transmission costs to non-solar customers in an "unfair" way. They want to charge solar customers something for that plant even during times when the customers don't use it. Solar companies, on the other hand, want to leave net metering "as is", saying that tampering with those arrangements could kill residential solar. In addition, they say, some accounting studies show that non-solar customers actually benefit when their neighbors install solar.

In this article, as an interested bystander, I try to unpack the claims from both sides.

Background: I'm a retired engineer who lives in Scottsdale.  I've been a satisfied APS customer for 21 years, and I've had a 48-panel SolarCity system installed and running on my roof for more than 4 years.

I spent 23 years (1969-1992) as an engineer and manager in the old AT&T Bell System, a gigantic regulated monopoly that was overseen by government regulatory agencies not unlike the Arizona Corporation Commission (ACC) that oversees Arizona Public Service (APS).  I know how outside competition can be upsetting to a regulated monopoly.

I also have a PhD in electrical engineering, which helps me understand the technical issues.

So, looking beneath the politically charged rhetoric --

When the solar system on my roof generates 1 kilowatt-hour (kWh) of energy, what happens to it?  The two possibilities are:

Let's start by considering Case (A) and talk about who gains and who loses when that kWh is consumed immediately by me.

It's hard to accept A2 even on its face. In particular, if I generate a kWh on my own and consume it in my own house on my own property without ever using any APS facilities, then what business is it of APS, and in what sense are they paying me?  This strikes me as hi-tech chutzpah.  After all, APS could make the identical claims if I had simply shut down an air conditioner for about 30 minutes, avoiding the use of that kWh altogether, thereby denying APS that same revenue and shifting those same fixed plant costs to my neighbors. So what's "fair" about APS wanting to charge me any kind of tax or fee for electricity that I generate and use entirely on my own?

Furthermore, regarding A3, APS neglects to mention that by generating a lot of my own electricity, most often during the hours of highest demand, I help APS defer investment in new generation and transmission facilities, thereby holding down electric rates for my fellow ratepayers. Where do they include that factor in their claims about "fairness"?

That said, APS does have a legitimate rejoinder. My solar system would be useless without APS as backup power and a source of timing and synchronization for the energy that my solar system generates.  If a cloud passes over the sun, briefly causing my solar system's output to fall below my demand, APS is there instantly to fill the gap with virtually no drop in voltage, distortion of waveform, or loss of  60-Hz timing that could cause trouble for my household appliances.

Of course, I pay APS the full retail price for every APS-supplied backup kWh I consume, and it's the software and electronics in my solar system that make the transitions appear seamless to my home appliances. But I must acknowledge that the timing/synchronization and backup capability just being there is a valuable service, even when I'm not using it. Speaking for myself, I'd be willing to pay something for that service as long as APS doesn't overdo it(!).

So, with the exception in the above two paragraphs, I don't see where ratepayers or APS is being treated "unfairly" when I generate and consume my own electricity via solar.

Next -- what about Case (B) above, where my system generates a surplus kWh and exports it to my neighbors who consume it immediately. What happens there, and who gains or loses?

All in all, I have a tough time buying APS claims that ratepayers are getting hurt by residential solar.  I can see that APS and its investors may be getting hurt somewhat by restraining the capital investment on which they earn a guaranteed rate of return. And I can agree that I'm getting a valuable backup service from APS for which I'm making no explicit payment. But as compensation, APS does get to sell some of my surplus (free to APS) energy to my neighbors at APS' full retail price while paying me a far lower price and getting to wait until the end of the year to pay me. And at least one detailed study shows a benefit to ratepayers when their neighbors install solar.

Agenda-driven anti-solar advertising tends to look at only portions of the transactions described above. By picking and choosing the right transactions, those ads can make net metering look unfair when it really isn’t. For example, some of those ads claimed that APS has been compensating me for a surplus kWh at “five times the market value” of that kWh when they give me a kWh credit on my bill. The ad neglects to mention that, as described in B1 above, APS charges my neighbors the full retail value for that kWh – a kWh that cost APS nothing at all for generation and transmission.

As solar costs continue to plummet and electric utility rates continue to rise, there's a crossover coming in the future when utilities could lose a lot of their cash-cow business to home-owner-generated electric energy.   The ACC just granted Arizona power utilities a huge concession in closing a docket on allowing competition in the Arizona electric power market form other electric power providers. Now the utilities are running political-campaign-style ads against solar, with loaded terms (borrowed from the Left) like "fairness", "free ride", "fair share", and "subsidy." Perhaps they hope this rhetoric will convince the ACC to remove the only other competition on the horizon. I hope that doesn't happen.

In summary, in my view:

If the ACC truly wants to represent the ratepayers, they will make very certain that any changes to net metering do not destroy the economic incentives to install residential solar. That competition will restrain rising power utility rates automatically and far more effectively than the ACC's oversight alone.

In fact, if I were the CEO of APS, I would issue the following dictum: If anyone is going to cannibalize our business with distributed-generation solar, it's going to be us, damn it! I want to see plans for how we can use distributed-generation solar ourselves, partner with solar providers, or even buy them if we have to. I want to see us lead in the use of distributed solar for our customers and not be dragged kicking and screaming into it long after someone else has been successful with it!