According to Maannews: Wafa reported that INPA staff began digging up graves and land in the cemetery around 20 days ago. Officials returned on Sunday to continue digging, which Wafa noted was “for the benefit of building a national Israeli park on parts of the cemetery’s land.” 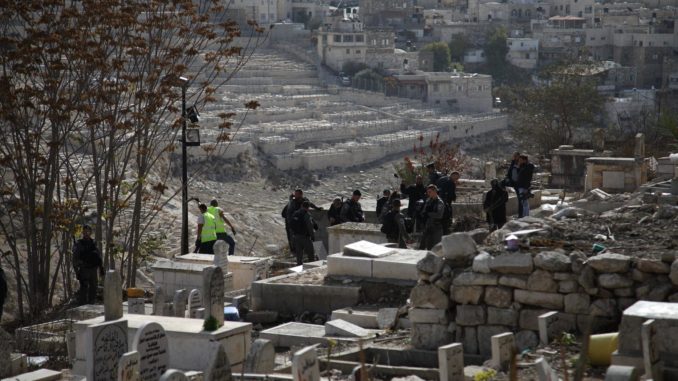 In 2015, the Bab al-Rahma cemetery was subject to demolitions after Israeli authorities announced plans to seize parts of the cemetery for a national park trail in 2015.

The fate of Jerusalem and its holy sites has been a focal point of the Israeli-Palestinian conflict for decades, with numerous tensions arising over Israeli threats regarding the status of non-Jewish religious sites in the city, and the “Judaization” of East Jerusalem.

A terrifying documentary about the abduction and wholesale murder of Shephardic Israelite children in Israel, using massive exposure to X-rays. This was done under the pretense of "treating" the children, ripped from their parents upon entering Israel, for ringworm. (Chillingly reminiscent of Europeans being rounded up and "de-loused" in "showers" in the Nazi death camps.) Other Shephardic children were used for "medical experiments", while still others were stolen to be raised by "racially superior" Ashkenazi-Khazar parents.

For those who do not know, the majority of northern European "Jews" are not biblical Jews at all (i.e., descendants of Jacob.) Rather, they are descended from Khazars of central Asia. Their religion is not centered on the Bible (Torah) as one might suppose, but rather upon the Babylonian Talmud. It is not uncommon for these Talmudic Khazars to believe that they are genetically or racially superior to the Shephardic Jews. However, the Shephardic Jews are much more often actually descended from Israelite ancestors.

This documentary was filmed in Hebrew (subtitled in English) in 2001. It is safe to say that everyone you are watching is now dead.