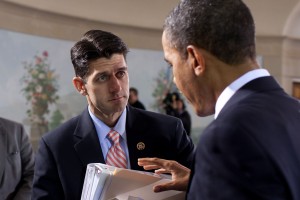 The Ryan-Obama omnibus bill that just passed Congress has Big-Government politicians in both parties rejoicing. It has a $1.1 trillion price tag and does nothing to reduce the gargantuan debt we are passing on to our children and grandchildren. Including entitlement obligations, that debt now exceeds a stupefying $200 trillion. The omnibus bill is over 2000 pages in length and was offered up at the 11th hour to a Congress eager to get home for the holidays.

Speaker Paul Ryan is a man who surely understands the budget and debt problem. He has tried to reassure Americans with something like “Don’t worry — we’ll fix this in the next budget by returning to regular order.” Small comfort. We’ve been hearing that every year since at least 2009.

And of course this budget and debt nightmare is only one of many gargantuan problems with a federal government that is still spiraling out of control, faster and faster, seemingly without limit, despite a supposedly conservative GOP now holding a majority in both houses of Congress. There are now over 500 federal agencies and departments churning out thousands of new regulations every year, with no end in sight.

It’s time We the People did more than just try to “elect the right people.”

Imagine, therefore, a powerful 28th Amendment to the Constitution that reads as follows:

An Amendment to Check the Power of the Federal Government

Section 1. The several state legislatures, by a three-fifths majority vote, shall have the power to (1) repeal any law passed by Congress, (2) veto any line item in any appropriations or other budget legislation, (3) vacate any ruling of the Supreme Court, (4) cancel any Presidential executive order, (5) withdraw any regulation issued by any Federal agency or department.

Section 2. In any action under this amendment, each state legislature shall have exactly one vote, and none of the actions shall be subject to judicial review. Each action shall become effective on the day that the three-fifths-majority requirement is met.

Many related amendments have been proposed for our Constitution, including those that would impose term limits for Congress and the Supreme Court, balanced budgets, repeal of the 17th Amendment, and so on. But perhaps more than any other, the above amendment would have an immediate salutary effect on all three branches of the federal government, providing a major new line-of-defense against a runaway federal government.

In particular, like a missile in a silo that one never needs to fire, this Federal Power Check (FPC) amendment would immediately force Congress, the President, and the Supreme Court to keep looking over their collective shoulders toward the state legislatures, knowing that any overreaches would not be tolerated by We the People. That is exactly as it should be, and should have always been, in a government of, by, and for the people.

Besides checking any future abuses and usurpations, the same amendment would empower the people, through their state representatives, to correct past actions by Congress such as Obamacare, Presidential executive orders such as immigration-law non-enforcement directives, or Supreme Court rulings such as the redefinition of marriage.

We all know that the Constitution, by design of the Framers, already contains a system of checks and balances among the Legislative, Executive, and Judicial branches. And while some argue that free elections are supposed to be We the People’s ultimate check, we also know thatelections alone have not been sufficient to protect us from the weight, the power, the cost, the complexity, the ineptitude, and the corruption of the professional political/lobbyist/donor class that has infested Washington, DC for so long.

It is time, therefore, to add a fundamental new power check to the architecture of our government, one that shifts the balance of power back towards the states and We the People. Hence the draft Federal Power Check (FPC) amendment proposed above.

What are the chances that Congress itself would ever propose an amendment like the FPC amendment above?

There are two chances — slim, and none!

Fortunately, the Framers presciently saw the day when the federal government would become so overbearing and drunk on power that they would never voluntarily relinquish any of it. That’s why the Framers gave us the second half of the Constitution’s Article V which provides a mechanism for the state legislatures to amend the US Constitution without the permission or control of Congress, the President, or the Supreme Court.

With a Federal Power Check amendment like the one above in place, we might never again see a trillion-dollar budget foisted on us at the 11th hour by Washington’s professional political class!

Mike: The Supreme Court has no standing in a state-driven Article V proceeding. We're used to thinking SCOTUS is the final authority at the top of the pyramid on absolutely everything, but it's not true. If you have not already done so, please read Mark Levin's "The Liberty Amendments."

If we don't use this amendment as intended, IN ADDITION TO (not in lieu of) electing the right people, the battle may already be lost.

But wouldn't the Supreme Court force themselves into a review of the amendment, regardless of what the amendment says to that effect?  Even though the Constitution originally made the Congress more powerful than the other two branches, Congress has willfully allowed them to usurp more and more power from them.  So why would the Court, especially the judicially active Liberal group, just sit back and let the Amendment go through as written above and reduce their power?